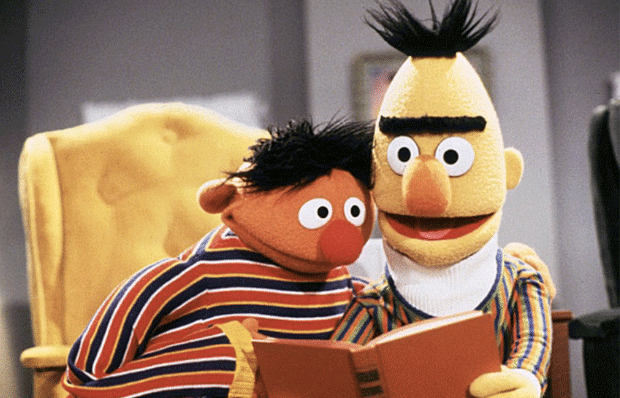 An Emmy-winning scriptwriter who worked on Sesame Street during the show’s heyday has revealed he does consider two of the show’s central characters, Bert and Ernie, to be a couple.

Speaking to Queerty, songwriter Mark Saltzman was asked if he thought of the pair as gay. He admitted he had no other way to ‘contextualize’ them.

‘I remember one time that a column from The San Francisco Chronicle, a preschooler in the city turned to mom and asked “are Bert and Ernie lovers?”’ he said. ‘And that, coming from a preschooler was fun.’

‘That got passed around, and everyone had their chuckle and went back to it,’ he added. ‘And I always felt that without a huge agenda, when I was writing Bert and Ernie, they were. I didn’t have any other way to contextualize them.’

Saltzman furthermore admitted that the pair’s shenanigans were often inspired by his real-life relationship with late documentary filmmaker Arnold Glassman.

‘More than one person referred to Arnie and I as “Bert & Ernie”,’ he added. ‘Arnie as a film editor – if you thought of Bert with a job in the world, wouldn’t that be perfect? Bert with his paper clips and organization? And I was the jokester.

‘So it was the Bert and Ernie relationship, and I was already with Arnie when I came to Sesame Street. So I don’t think I’d know how else to write them, but as a loving couple. I wrote sketches… Arnie’s OCD would create friction with how chaotic I was. And that’s the Bert and Ernie dynamic.’

However, Saltzman added the caveat that he never ‘said to the head writer, “oh, I’m writing this, this is my partner and me.”’