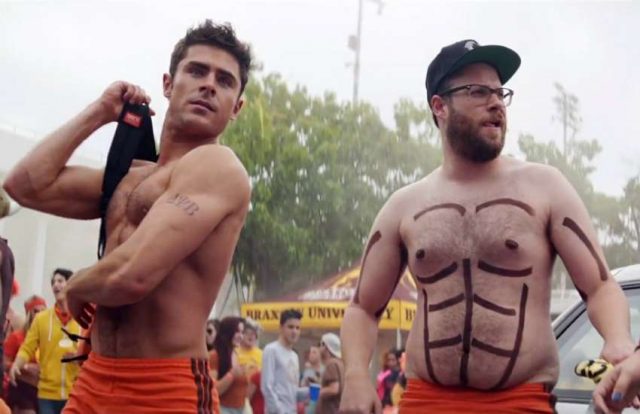 Seth Rogen has addressed homophobic jokes he made in some of his early movies.

Speaking to American GQ for the magazine’s latest cover feature, the actor admitted his regret over offensive humor in movies such as Superbad and The 40-Year-Old Virgin.

Over ten years after both films were made, Rogen said he has since evolved with the times.

For the publication’s June/July issue, the 37-year-old threw on a neutral double-breasted suit and stood on a sun-splashed beach, photographed by Sebastian Mader.

‘I think if you actually care, then it’s easy. We do not want people to feel bad when they’re watching our movies,’

‘I’ve had people come up to me and be like: “That made me feel like shit when I was in the movie theatre and everyone was laughing about that.”

‘I’s something people have been like: “It’s not fun to be in the theatre when people are laughing at that. Knowing what they’re probably actually laughing at.”

‘And I don’t want anyone to have that experience watching our movies.’

On Superbad, Rogen told The Guardian in 2016 that he, too, regretted writing the homophobic jokes made in the 2007 film.

said that ‘there are probably some jokes in Superbad that are bordering on blatantly homophobic at times.’

‘They’re all in the voice of high school kids, who do speak like that,’ .

‘But I think we’d also be silly not to acknowledge that we also were, to some degree, glamorising that type of language in a lot of ways.’