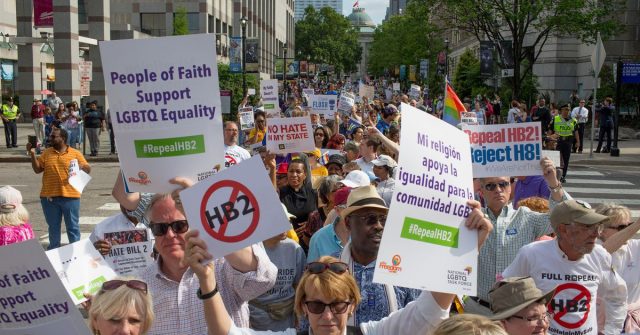 A U.S. District Judge approved a settlement Tuesday that clears the way for transgender people in North Carolina to use whichever bathroom, shower, locker room or other public facilities match their gender identity.

If you thought, “Wait, wasn’t that already settled?” Nope, not until now.

As Reuters reported, U.S. District Judge Thomas Schroeder ok’d the agreement between the American Civil Liberties Union, Lambda Legal and Gov. Roy Cooper (D). Schroeder is the same judge who ruled in 2016 that North Carolina’s university system must permit trans students to use bathrooms and public facilities matching their gender identity, despite the state’s passage of House Bill 2.

That controversial 2016 measure mandated transgender people could use only the bathrooms, changing rooms and showers in state-operated facilities that corresponded to the gender marker on their birth certificates.

The ACLU went to court to block the law, arguing it violated the rights of transgender Americans to equal protection and privacy under the U.S. Constitution.

When businesses, celebrities and sports leagues from the NBA to the NCAA to the ACC boycotted North Carolina after passage of H.B. 2, it cost the state $3.76 billion, and the costs are still adding up. Not one NBA Final Four game through 2026 is scheduled to be held in North Carolina.

So voters tossed out Gov. Pat McCrory (R), the controversial law’s chief proponent, and in 2017, the Republican-controlled legislature negotiated a do-over with Cooper, his Democratic successor. H.B. 142, the so-called compromise, repealed H.B. 2 but did not restore transgender rights and removed the rights of communities to set their own human rights protections. As Jim Buzinski called it, “It’s a sham of a repeal and will lock in discrimination against LGBT people through 2020.”

“House Bill 142 literally does not do one thing to protect the LGBT community and locks in HB2’s most basic and offensive provision,” wrote editors at the Charlotte Observer. “It repeals HB2 in name only and will not satisfy any business or organization that is truly intolerant of an anti-gay environment and of a state that codifies discrimination.”

H.B. 142 left trans people in limbo, so the ACLU amended its lawsuit, and that’s what was settled Tuesday. In his eight-page ruling, Schroeder said the settlement bars state officials from using legislation “to prevent transgender people from lawfully using public facilities in accordance with their gender identity.”

One thing that Reuters noted is not in the settlement rewriting H.B. 142: the law still prohibits North Carolina cities and towns from creating their own ordinances protecting LGBTQ people from discrimination until December 2020, after the next national election and the next governor’s race.

“While this part of the court fight may be ending, so much urgent work remains as long as people who are LGBTQ are denied basic protections from violence and discrimination simply because of who they are,” said Irena Como, acting legal director of the ACLU of North Carolina, in a statement.

Read the entire ruling, via the ACLU, here: carcano_v_cooper_-_consent_decree.pdf