Home Gay Life Sharice Davids is making a name for herself in Congress fighting for... 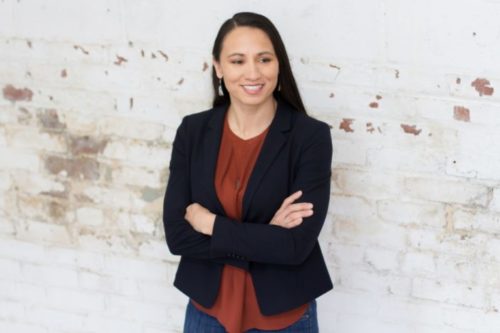 U.S. Representative for the 3rd Congressional District of Kansas

Davids is the first LGBTQ Native American member of Congress and is co-chair of the Equality Caucus. With her diligent approach to learning the ropes and her eloquence, Davids quickly has emerged as one of the most promising freshmen members of Congress.

Davids made history when she was elected to Congress last November, defeating four-term incumbent Republican Kevin Yoder. One of two Native American women to be elected (a first) and the first out member of Congress from Kansas, Davids flipped a district that hadn’t elected a Democrat to Congress in a decade, contributing to the Democrats’ success in regaining control of the House.

In some ways, Davids has the kind of experience you might expect members of Congress to have. She has a law degree from Cornell and spent time as a White House fellow.

But in key ways, Davids is unique. A member of the Ho-Chunk tribe, Davids has lived on Native American reservations, for a while attending Haskell Indian Nations University. She has also been a mixed martial arts professional. “I grew up obsessed with Bruce Lee,” she said. Although she cut back on her workouts during the campaign, she acknowledged, “I mean, I hit a bag every now and then.”

Even with the electorate’s growing increasingly comfort with gay candidates, even at the presidential level, Davids was still pushing the envelope in her Kansas district. But Davids did not downplay the significance of her being an out candidate.

“Having LGBT people sitting in the room while decisions are being made, and sitting there as peers, will shift the conversation,” she told The New York Times during her campaign. “I think it’s important that the lived experiences and the point of view of LGBT folks be included in conversations that affect all of us.”

Davids has carried that principle into Congress. She was an eloquent proponent of the Equality Act.

“How crazy is it, how wild is it that I can be the 3rd district representative of the state of Kansas for the United States House of Representatives and if I went to get an apartment I could be turned away for no other reason than I’m part of the LGBTQ community? That is outrageous and it something that we have a chance to fix,” Davids said.

Davids has experienced that sort of bias firsthand. She was ineligible for housing on an Indian reservation because she lived with a female partner.

While Davids hasn’t been courting the spotlight the way some other freshmen have, she has been making an impression behind the scenes. She has earned the respect of the Democratic leadership with her willingness to learn the nuts and bolt of legislating.

“I would put her toward the top of the freshman class in terms of doing things the right way,” Rep. Cheri Bustos, the chairwoman of the Democratic Congressional Campaign Committee, told the Kansas City Star.  “She’s not a showoff. She’s an athlete and if you’ve known any high-level athletes, they’re disciplined, they’re methodical… nailing all the fundamentals.”

Of course, that makes Davids a target for Republicans hoping to exact revenge on her. She wasn’t even in office for 24 hours when a Republican PAC ran an ad against her.

In a backhanded way, the attack ad was a kind of compliment. It’s an acknowledgment from the other side that Davids is a formidable opponent. As her experience in Congress keeps growing, Davids is only going to become more formidable.