Home Gay Life She Refused To Let A Gay Man Teach Dance To Her Kids,... 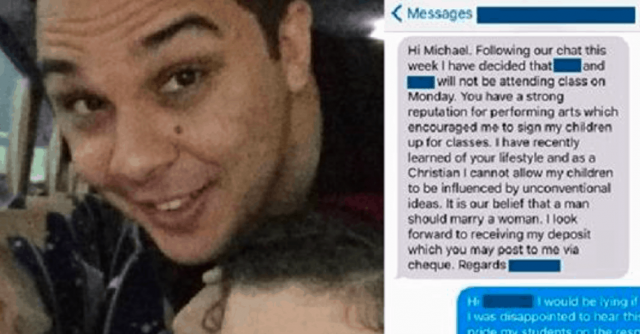 Discrimination takes many forms. In this case, it takes the form of a stuck-up parent who was determined to raise her children as bigots. Michael Neri is a 26-year-old drama teacher from Kidderminster who was told by a mother that she was withdrawing her children from his class.

Apparently, Neri’s “lifestyle” didn’t fit with her Christian beliefs. Clearly she didn’t get the memo on love for all of God’s children. Where this might be a crushing blow to the confidence of some gay men, Neri took the opportunity to set the woman straight (so to speak) and shared his empowering words with the people of the Internet.

“When I first saw the message I had to read it through twice,” Neri told the Metro. “I believe that everyone is entitled to their own opinion, but it was still a hurtful thing to receive.” Not only is he a renowned dance teacher, Neri also set up the Talking Props Theatre School which the mother had decided her children should not attend.

“I didn’t want to upset anyone, but I needed to protect myself and my organisation, so I thought I would reply in a polite manner,” he stated. “If the mother changes her mind then her children are more than welcome to attend classes here – I certainly don’t blame them for the way their mother thinks.” As yet, she has not replied to his message.