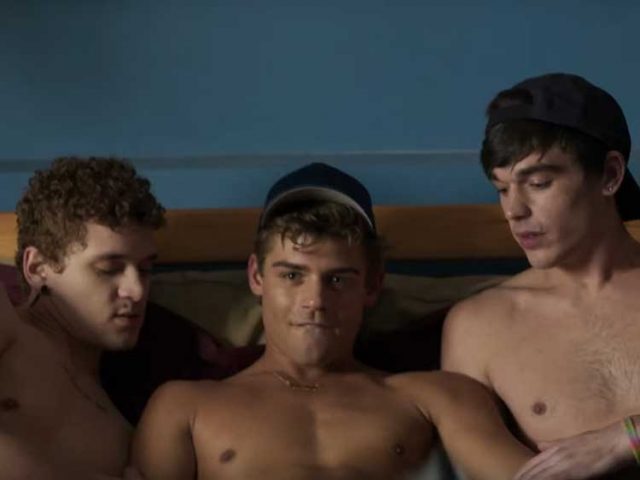 Oh, the challenges of playing a notorious adult film star: they are legion.

In the latest issue of PrideSource, 25-year-old actor Garrett Clayton unpacks his feelings about playing Brent Corrigan in Justin Kelly’s long-awaited King Cobra (in theaters and On Demand starting October 21). After discussing his contractually mandated butt shot, his favorite Brent Corrigan scene, and how one prepares for such a role, he surprisingly refuses to divulge his own sexuality to the interviewer, believing that “it just distracts” from his work.

Here are some highlights:

On preparing to play a gay adult film superstar:

You want to watch someone’s work and study the way they’re into somebody or not. How do they kiss? Do they bite? Do they like biting lips? Do they like using more tongue? Are they more aggressive in their work? Does he play the victim?

On his favorite Brent Corrigan video:

It’s the first video he did with Bryan where he’s lying in the lawn. Nobody knew at that time that he was 17, and I was just surprised that there are so many sites that still have that video online. It’s crazy. And to see him as a 17-year-old doing this, and the fact that I can find it online – I literally just typed in “Brent Corrigan first video” and a bunch of different websites came up. I just think it was fascinating to watch somebody at that age doing what they’re doing. To me, that was the most interesting piece of work because, I mean, how could it not be?”

On his nudity contract:

I spoke to Justin about what I would agree to do, and it was: If you discuss with me first and I can understand logically why the nudity is a sexual act that can promote the plot in this scene, then I’ll do it. When I’m in the shower, it’s a sign he’s becoming comfortable with his sexuality. The montage is showing him becoming a star. At the end, I have my butt shot and, funny enough, that was my idea because Justin and me kept talking, saying, “When are we going to do the butt shot?” because (Brent is) known for his butt.

On Brent Corrigan’s sharp criticism of his portrayal:

I think it almost started to affect me. But I made a little mantra: It’s not my place to judge; it’s just my job to tell the story.

On his own sexuality:

I moved out to LA to have a career where I got to play characters and focus on work and do all these awesome things, and I’m getting to do that now. I just don’t think it’s pertinent to talk about my personal life. I don’t think it adds to the work; it just distracts from it.