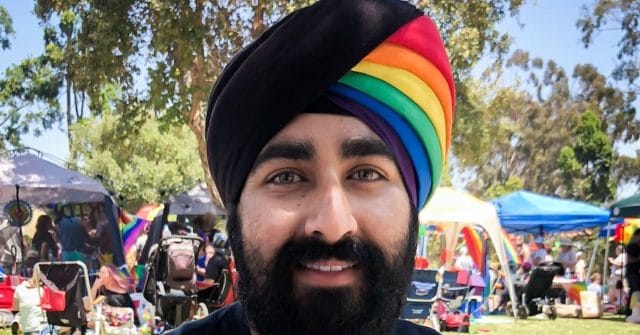 Jiwandeep Kohli, a Sikh, bisexual baker and brain scientist, has gone viral on Twitter afterposting a picture of his rainbow turban.

Kohli posted the photo to mark the beginning of Pride month and it currently (as of June 3) has over 2,000 retweets and 16,000 likes.

He wrote on Twitter: “I’m proud to be a bisexual bearded baking brain scientist. I feel fortunate to be able to express all these aspects of my identity, and will continue to work toward ensuring the same freedom for others.”

Kohli, who lives in San Diego, said he made the turban himself but that he has had “a decade or so of practice.”

In another tweet he wrote: “One of my normal black turbans that I supplemented with strips of other colours in exactly the right places. Took about an hour of tying, untying, and safety pinning, but totally worth it!”

The picture has received lots of positive attention and one Twitter user wrote: “Can’t help but chime in to comment that you are wearing the fiercest turban I’ve ever seen!”

“This is the coolest implementation of the pride flag I’ve seen in ages,” wrote another.

Kohli was surprised at the popularity of his photo, but grateful for the positive reaction.

After his tweet went viral, he wrote: “This received a lot more attention than I imagined it would! It also makes me feel so much pride and joy to be a part of such supportive and welcoming communities.”

Pride month is held in June to commemorate the historic Stonewall riots of 1969, which sparked a civil rights movement.

This year’s Pride month will be the 50th anniversary of the riots.