Home Gay Life Single gay dad: ‘The days my sons were born are the happiest... 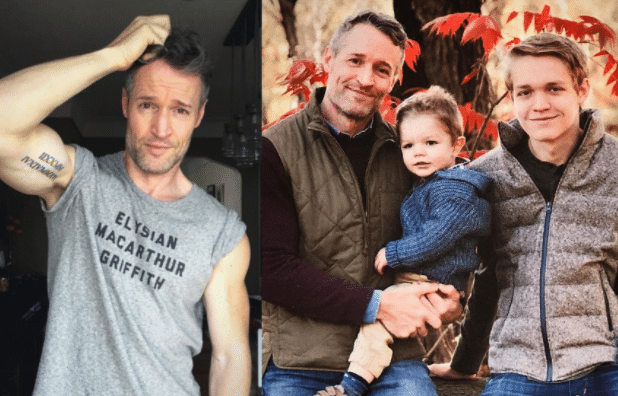 ‘For all I’ve taught them, I feel like they’ve taught me even more’

Bill Tamlyn is a single gay dad of two from Minneapolis, Minnesota.

The 51-year-old writer, model and commercial actor came out as gay 15 years ago, while still married to a woman.

His parents had just passed away and he was gradually coming to terms with his own sexuality.

Chilly #sundays in #minnesota are made for #longjohns #underwear from @rondorff cuz they know a thing or two about the cold in #Sweden. ❄️❄️❄️

While in his marriage, he had his first son Liam, who is now 18 years old.

So when Bill came out, his first priority was making sure his son would be alright.

Bill told Gay Star News: ‘His mother and I made him our priority, ensuring he had consistent and stable love from both of us despite the fact that our lives were going to diverge.

‘It’s a journey I wouldn’t want to relive, but it brought me to where I am today. [I’m] happy, content and comfortable in my own skin,’ he said.

Although the marriage ended, Bill said he remains best friends with his ex-wife, with whom he shares custody of Liam.

‘Being a father is the most gratifying experience of my life’

Then two years ago, Bill’s second son Charlie was born via surrogate.

He’s no longer in contact with Charlie’s birth mother and surrogate but Liam’s mother plays a role in Charlie’s upbringing.

Bill jokes: ‘Sadly that role ends when it comes to changing diapers and rising at 5 a.m for the day.’

He juggles fatherhood with a demanding modelling career. He goes to the gym 5-6 days a week and has been working out for the last 25 years.

As a fitness model, he needs to stay the same size. He said: ‘So I’m on a weight training and conditioning program focused on strength and athleticism, not gaining size.

‘To be honest, I’m happier with my body now than at any other point in my life,’ he said.

Here's to another trip around the sun. Feeling grateful for all the ups and downs of life these past 51 years. Grateful for my family, friends and my work. For my two beautiful sons; they are my world. For my good health and happiness even when it feels elusive at times. For my wrinkles, grey hair (aka God's highlights), bumps and bruises. For laughter, love and feeling alive again. And for all the birthday love and well wishes from friends near and far. Cheers to you! #thisis51 #birthdayboy #leo #itsnotataco #roseallday / Trunks by @rondorff ?

‘For all I’ve taught them, I feel like they’ve taught me even more’

On the joys of fatherhood, the single gay dad said: ‘The days they were born are the happiest of my life thus far, and being a father is the most gratifying experience of my life.

‘For all I’ve taught them, I feel like they’ve taught me even more. Patience, humility, selflessness, unconditional love, forgiveness, responsibility, commitment,’ he said.

Bill said he instills values and morals into his children, just like any other dad would.

He said: ‘I’d like to think that my sexuality doesn’t define or in any way change my role as a dad.’

“A father is a man who expects his son to be as good a man as he meant to be.” – Frank A. Clark

The single gay dad continued: ‘I still read to Charlie, play ball with both of them, care for them when sick and discipline them (lightly of course because I’m a softie) just as any father would.

‘However, I do see the impact I’ve had on my eldest son’s views of what constitutes a family.

‘From a very young age, he was aware that a family could be just a parent and child or a couple with or without children,’ he said.