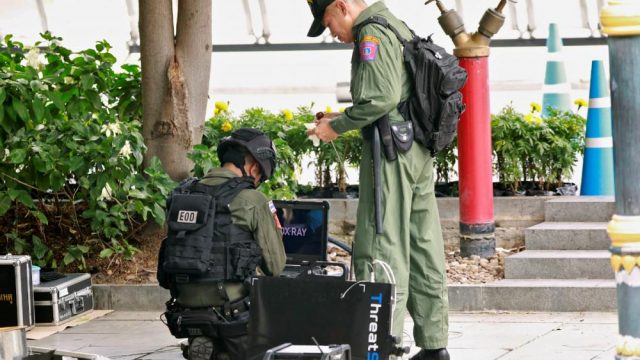 A total of six bombs exploded at three locations in Bangkok on Friday and one explosive device was recovered before it blew up, a senior police officer said.

Four people were wounded, the Erewan Medical Centre said, adding that none of the injuries are serious and that “all are receiving medical attention at hospitals.”

The blasts were heard shortly after 9 am local time (04:00 CEST) as the Thai capital hosted a Southeast Asian security meeting attended by top officials from the United States — including Secretary of State Mike Pompeo —, China and other world powers.

Police Colonel Kamtorn Uicharoen told Reuters that three bombs exploded at the Government Complex in Chaeng Wattana and one failed to go off. Two others blew up in the Chong Nonsi area.

“The bombs in these two areas were improvised explosive devices triggered by timer,” he said, while a “ping-pong bomb” exploded in the Suan Luang area.

There was no immediate claim of responsibility.

Thai Prime Minister Prayut Chan-o-cha wrote on Twitter: “I would like to condemn those causing the situation which destroys peace and damages the country’s image.”

“I have instructed officials to take care of public safety and those affected promptly,” he added.