Home Gay Life Six Russians were arrested for torturing gay teens and driving some of... 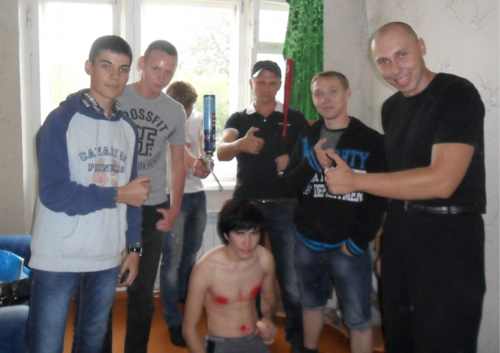 Nine members of “Occupy Pedophilia” were arrested, of which six were given a sentence of three to six years, for torturing gay teens, filming the horrible act, posting the recordings on the internet and driving the victims to commit suicide. The group is led by Maxim Martsinkevich and they claim to ‘identify and report pedophiles’, but this is not what they are actually doing. The group is responsible for at least 19 attacks against gay teens and instigates other groups in Russia to act violently against gay people.

The young men were captivated and taken into an apartment or a forest, after being manipulated by group members who would invite them to a date under a fake identity. The teens were victims to torture by physical violence, humiliation and the whole ordeal was video recorded. Some of them were even forced to drink their own urine. The attackers posted on their “Occupy Pedophilia” group on VK.com, a photo that shows an unidentified young man in his underwear, covered in blood and forced to keep a sex toy in his hand while the abductors would smile and act brave in front of the camera.

The Sinarsky District Court Kamensk-Ural found nine of the members guilty of torture, death threats, and moderate health prejudices, but only six of them were incarcerated while the other three were given suspended sentences. The leader of the group is in jail for “hooliganism” and nine other arrested, but none of them were found guilty of being part of an extremist group.