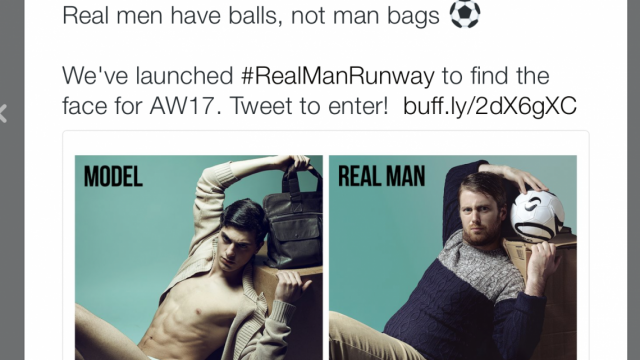 It’s safe to say every company wants their online ads to go viral, but not quite like this.

This weekend, the online menswear shop Jacamo earned the scorn of the Internet for the ill-advised ad above — #RealManRunway — due to its rather hapless and misguided concept.

A campaign to find the face of their Autumn/Winter line features a broody male model next to a so-called “real man,” and features the caption: “Real men have balls, not man bags.”

Unsurprisingly, the Twitter minions wasted no time in decrying the ad as “homophobic” and rife with “toxic masculinity,” as well as playing into “old-fashioned stereotypes,” as Attitude reports.

@DCHomos @Jacamo ……or men who dont have balls because they're trans? Thanks from us trans gay dudes ?

@Jacamo Your PR team are almost as outdated as your chinos.

. @Jacamo disgusted to think that a company that is all about equality with bigger sizes would be so homophobic.

@DCHomos @Jacamo ……or men who dont have balls because they're trans? Thanks from us trans gay dudes ?