Home Gay Life Soccer captain tells homophobes to ‘suck on that one’ after World Cup... 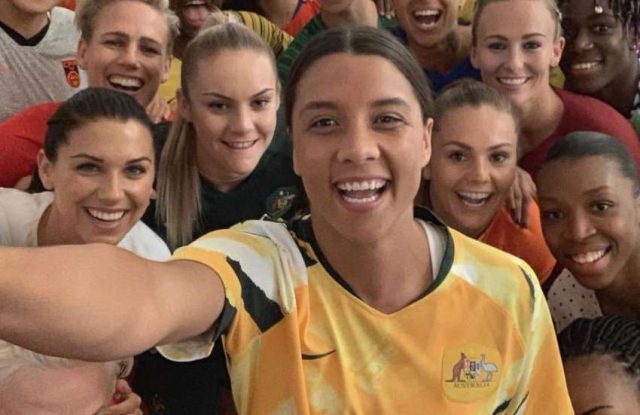 The captain of Australia’s national women’s soccer team had a clear message to homophobic trolls.

In a post-game interview after their massive 3-2 win over Brazil in the group stages of the World Cup, Sam Kerr told her ‘haters’ to ‘suck on that one’.

The captain of the Matildas – the name of the national team – revealed had targeted her on Twitter.

‘Social media gives people a platform to say whatever they want, so it was good to kind of send a message back home and send a message to the rest of the world,’ she said of the comments.

After the match Kerr took to Twitter to share some of the homophobic tweets she has received.

Kerr, 25, is in a relationship with American soccer player, Nikki Stanton.

The captain said the Matildas played well in their penultimate match in the group stages. They face off against Jamaica on Wednesday.

‘I’m so proud of the girls, I knew we were in it at halftime,’ Kerr said in a post-match interview.

‘There were a lot of critics talking about us but we’re back so suck on that one. It’s just outside noise, we don’t listen to the haters.

‘The reaction from the girls, you can see what it means to us. We were so disappointed after the first game.

‘We haven’t been reading (the criticism) but at the end of the day you can feel it.’