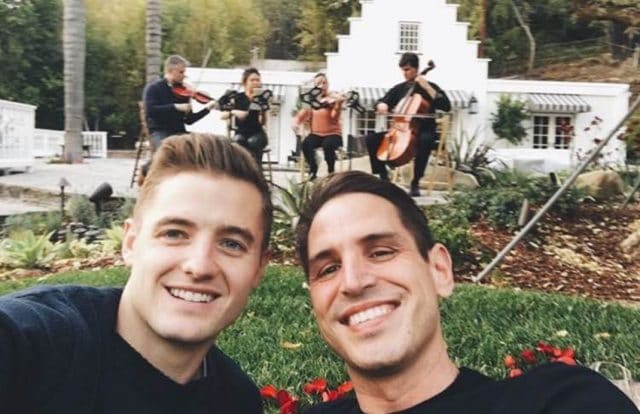 Rogers confesses to GSN: ‘We don’t have a venue yet’

The first openly gay man to compete in a top North American professional sports league took the stage at the Family Equality Council’s Impact Awards over the weekend and didn’t assume that anyone knew who he was.

‘Those of you who don’t know me, I play soccer with the LA Galaxy,’ Rogers said to prolonged applause.

The crowd at The Beverly Wilshire Hotel, filled with LGBTI movers and shakers and their allies, clearly were familiar with Rogers’ remarkable story.

Before the start of the event, which was co-chaired by his TV producer fiancee Greg Berlanti, he chatted with Gay Star News.
Rogers and Berlanti (Arrow, Riverdale, Supergirl) announced their engagement on New year’s Eve but have not announced a wedding date.

‘Sometime in December, we’re not quite sure yet,’ Rogers said.

The 29-year-old athlete and Berlanti became parents just over a year ago when son Caleb was born.

‘I think we’ve done a pretty good job at balancing everything. You can never be too prepared. Caleb came and we kind of had to go from there. Of course we had a plan of what it would be like but it’s been totally different. It doesn’t feel necessarily like we have to change that much. It’s been very seamless.

‘When I was younger I thought when you have a kid your life’s over. But for us it’s been so exciting – thinking of what we can do with him on the weekends and spending time with his grandmas.

There’s just so much we can do.’

Later on stage, Rogers talked about how during the first part of his 11-year pro career, he’d talked about how it made him feel to see his teammates walk into the stadium tunnel after a game and be greeted by their spouse and children.

‘I’d see the happiness it brought them and I thought this was probably never going to (happen) for me and it would make me sad,’ he told the audience.

‘In the past few years having Greg and Caleb waiting for me at the end of the tunnel to give a hug whether we won or lost has been really the happiest moments of my life.’

Berlanti was not at the event because of a filming obligation in Atlanta.

But he and Caleb appeared via video and Berlanti said of his life with son and fiancee: ‘We couldn’t be any happier.’

Thank you to everyone before us that made this moment possible… I feel extremely lucky and blessed to end 2016 engaged to the love of my life. ❤ Happy New Year!

Last week, the Galaxy played their first game of the 2017 season. It’s Rogers’ fifth season with the team as an out athlete and 11th season overall in Major League Soccer.

‘Sometimes I look back and think about when it was such a big deal when I came out and came back to play for the Galaxy,’ he told GSN.

‘Now it’s just like I’m another guy who’s part of the team and just kind of carry on with things. Strangely, it’s been very normal – it’s been great.’