Home Gay Life Solidarity is a force stronger than gravity 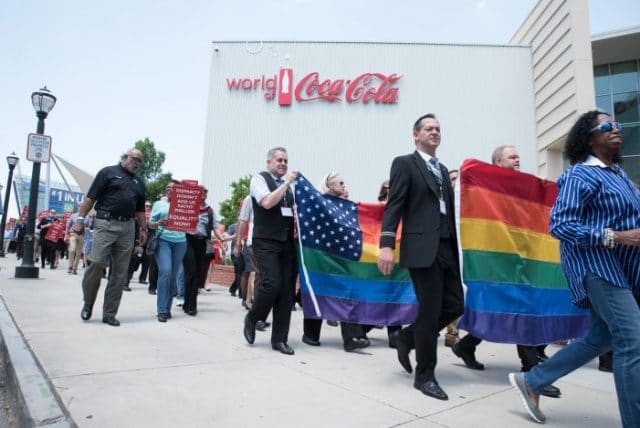 Sara Nelson became a United Airlines flight attendant in 1996 and has been a union activist since nearly the beginning of her flying career, including serving as strike chair for AFA’s United chapter. She was elected International President of the Association of Flight Attendants-CWA, AFL-CIO on June 1, 2014. 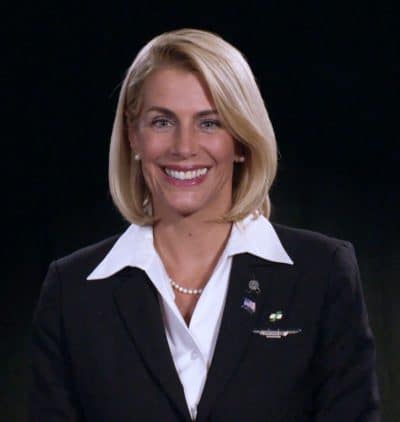 Solidarity is a force stronger than gravity.

When I repeat that phrase for a crowd there is often a pause as people take in the words, followed by nervous laughter and outright cheering at the awesomeness of it. We’ve seen examples of this all over the country this year from #RedforED teacher strikes promoting public good, to hotel and grocery workers fighting for one job to be enough or Amazon, Google, Uber, and Lyft workers fighting for respect, decency, human rights and the ability to organize their union.

Pride at work is playing out all over our country on the picket line. We lift each other up because we learn that including every expression of freedom makes us strong. We hear our unique stories and we share our common goals. We know that when every worker feels pride at work we are willing to fight for it to be reality.

On June 26, 2015, a dear friend walked into my office just a few minutes after the Supreme Court handed down the decision in Obergfell.

If I’m being honest, I was feeling cynical when he walked in. Don’t get me wrong, I wanted to celebrate. But at the time I was in the middle of a fight to prevent furloughs of our members, we were trying to stop the Obama administration from pushing a trade agreement that would gut millions of jobs, and our streets were filled with protestors demanding answers for the killings of black youths. I couldn’t see how this decision would have an impact on any of that.

But my friend was standing in my office with tears running down his face. And he is not a crier.

“I don’t have a partner,” he said to me. “I don’t know that I will ever be married. But that’s not what today is about. I didn’t realize until today the oppression I have felt my entire life. Today, my country recognizes me and the choices I make in my personal life as the same under the law. The feeling of being acknowledged as equal has moved me more than I ever expected it to.”

In those words, I remembered two things that are easy to lose sight of, but that we can’t afford to forget:

Just this week I received an email from an AFA member who wrote, “As a transgender person, I am terrified. I am turning to my union for help.” The call for help came to the right place.

Some of the earliest wins for LGBTQ rights happened not in a courtroom or in a legislature, but at the bargaining table. Years before San Francisco started issuing same-sex marriage licenses, long before Massachusetts became the first state to pass marriage equality, our union, the Association of Flight Attendants-CWA (AFA) negotiated for—and won—domestic partner benefits for every United flight attendant.

In fact, before any municipality passed anti-discrimination ordinances, unions representing all types of workers won anti-discrimination in contracts. Because on the job site, people realized that if management could fire a colleague for who they loved, he could sure as hell fire you for what you believed, or where you spent your Saturday night, or in the case of flight attendants just for getting married or having a baby or gaining 10 pounds.

These discriminatory issues were the heart of why our union was formed. But our work is not done. We are always “forming a more perfect union” until all of us are equal and free in our minds and under the law.

As we beat back discriminatory practices through a contract at one airline, another soon followed suit. Just as important, it gave members a sense of the power they had to change their own lives.

One contract alone won’t change the world, but every step forward makes the next step possible. Some of those members, and our union leaders, testified in the San Francisco hearings that led to domestic partner benefits and helped set the course to marriage equality.

When my friend came into my office, all the years of union activism fighting for those rights came flooding back to me. Suddenly the ruling wasn’t a distant thing handed down by a court, it was the natural outcome of years of hard work we won through solidarity, changing one contract, one workplace, one community at a time.

Unions work, at least in part, because they bring us together in a way nothing else can. People who might never have seen eye to eye in the public square can become allies in the workplace if we teach them that solidarity is their power.

That’s why I tell people all the time, start in the workplace and the politics will follow. If we can achieve solidarity and fight for one another’s rights at work, it’s a natural step to move to the public square. Solidarity is a force stronger than gravity. Once we feel its pull, we never want to let it go.

Of course, marriage equality is just one step in the fight for equality. We challenged airlines that wrongfully fired flight attendants for being HIV positive. We have fought to ensure our healthcare includes trans* coverage. We won’t stop fighting until there is a full ban on discrimination based on sexual orientation and gender identity. We promote the Equality Act and LGBTQ rights at every level of government.

A few years ago, it seemed that the tide was really turning. And here we are – with this White House, recognizing that the last thing we can do is take the rights we’ve gained for granted. Mother Jones told us, “We will fight and win. Fight and lose. But above all, we must fight!” Our rights are never absolute. They exist because generations of workers died to give us these rights.

They were shot down at Homestead Pennsylvania and in the hills of West Virginia. They were hanged for the Haymarket affair in Chicago, and beaten on an overpass near Detroit – all for taking a stand for the rights of working people. There were beatings at Stonewall and murders in San Francisco City Hall. These activists thought it was important enough to stand up against all odds and put everything on the line to make it better for their families – and for our families. Today it’s our turn.

In just the last month, the Trump administration has taken drastic steps to roll back LGBTQ rights.

Since taking office in 2017, Trump has gutted protections for LGBTQ kids in our public schools and college campuses, especially for trans kids. He banned trans people from serving in the military. He’s pushed rules allowing adoption and foster agencies to discriminate against LGBTQ parents. He’s befriended repressive regimes that criminalize your very existence.

Pitting people against each other is a specialty of those with money and power.

There’s a reason that people with wealth and power don’t like it when we come together in unions. Unions don’t just create power at work (though they hate that, too). Unions are a training ground for civic action. Unions help us deliver immediate, tangible wins in our everyday lives, and give us a taste of the power we can have in our democracy.

When unions were at our strongest, America made headway against inequality of all kinds—social, racial, economic, educational, you name it. But as a decades-long war against unions took its toll, the last 40 years have seen the gaps growing again.

During those 40 years, some movements flourished. The LGBTQ movement is one of them. But this moment is a stark reminder that injustice anywhere is a threat to justice everywhere.

The people attacking any one of us want to take the power of solidarity from all of us. They want us to feel small, alone and helpless so they can exploit us. We cannot allow them to succeed.

Unions are a powerful antidote because in a union you are never alone.

My first week on the job, my flying partner told me “Listen: management thinks of us as their wife or their mistress, and in either case they hold us in contempt. Your only place of worth is with your flying partners. Wear your union pin. If we stick together, there’s nothing we can’t do.”

The pioneering women who formed my union rejected the idea that a mature woman no longer had value or that sex could be traded for favorable schedules. They brought us together and showed us our greatest power was when we stood with one another.

The issue of sexual harassment isn’t about body parts; it’s about power. Calling it out means we are ready to claim out power. The same is true with anti-LGBTQ bullying. It is about power. It’s about saying you don’t control what happens in your own life.

Solidarity means no one gets left behind. It means every one of us commits to fighting like hell for the rights of the person standing next to us. We’ll win when we can look one another in the eye and say, “I’ve got your back,” so we can both have PRIDE at work!