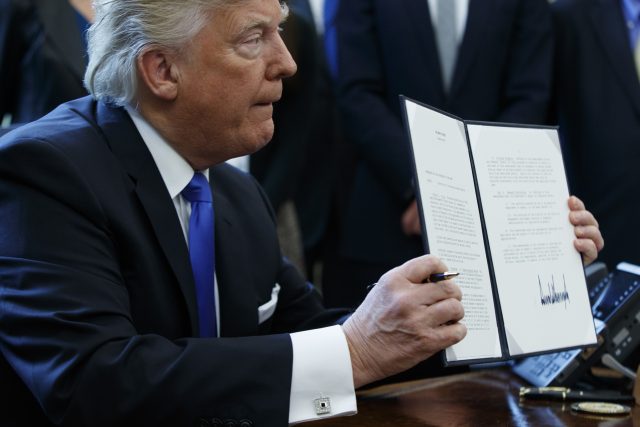 An executive order from President Donald Trump opening up discrimination against the LGBTQ community on the basis of religious belief is expected sometime this week, possibly as soon as today.

Several sources spoke with LGBTQ Nation on the condition of anonymity who have told us that the order will allow for discrimination in a number of areas, including employment, social services, business, and adoption.

From what we’ve heard, the executive order could be far-reaching, and could include: making taxpayer funds available for discrimination against LGBTQ people in social services; allow federally funded adoption agencies to discriminate against LGBTQ parents; eliminate non-discrimination protections in order to make it possible to fire federal employers and contractors based on their sexual orientation or gender identity; and allow federal employees to refuse to serve people based on the belief that marriage should be between a man and a woman, and that gender is an immutable characteristic set at birth, which would impact a broad range of federal benefits.

The order is expected to come in the packaging of so-called “religious freedom,” which argues that someone’s religious beliefs should be enough to prevent them from having to provide goods and services to members of the LGBTQ community if doing so would conflict with said beliefs.

Vice President Mike Pence gained widespread notoriety for his Religious Freedom Restoration Act, passed during his time as the governor of Indiana. He later backpedaled and signed an executive order removing language allowing for discrimination against the LGBTQ individuals.

“The rumors of an anti-LGBTQ executive action by President Trump are deeply troubling,” JoDee Winterhof, the Human Rights Campaign‘s Senior Vice President for Policy and Political Affairs, told LGBTQ Nation in an emailed statement. “We already know that he is willing to target and marginalize at-risk communities for his perceived political gain. As the President and his team plan their next steps, we want to make one thing clear: we won’t give one inch when it comes to defending equality, whether it is a full-on frontal assault or an attack under the guise of religion. Mike Pence should know that better than anyone given his track record in Indiana.”

“The Human Rights Campaign will stand with those who have already been targeted by this Administration and are prepared to fight tooth and nail against every effort to discriminate.”

North Carolina has been on the receiving end of its own boycott over its decision to allow for discriminate with House Bill 2 (HB2), which, in part, nullified non-discrimination ordinances passed by cities and municipalities throughout the state after Charlotte passed an expanded ordinance providing protections for LGBTQ people.

Trump has signaled support for anti-LGBTQ legislation in the form of the First Amendment Defense Act (FADA), pledging on his website to sign it into law. FADA would allow for businesses and individuals citing a religious belief to discriminate against the LGBTQ community and prohibit the federal government from taking “discriminatory action” against them for doing so.

Members of the House and Senate recently confirmed with BuzzFeed News‘ Dominic Holden that they plan to refile FADA.

I’ve confirmed House and Senate members plan to refile bills to protect people who have a religious objection to same-sex marriage.

Update 1: Press Secretary Spicer was asked at today’s press conference about the rumored religious freedom executive order, as well as HRC‘s statement on it, and he refused to answer the question.

Update 2: A White House spokesperson has said that an anti-LGBTQ executive order isn’t the plan at this time.