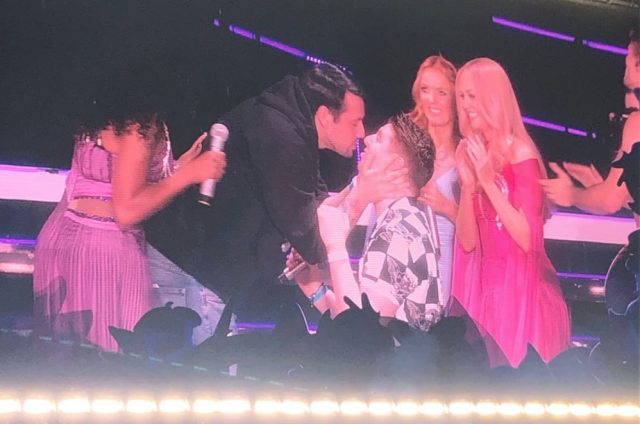 The Spice Girls invited two fans onstage at their concert in Manchester last night (May 31) for a memorable proposal.

Lee Christie was invited onstage by the Spice Girls so he could propose to his partner Duane Watters. Both men are big Spice Girls fans.

Afterwards, in an apparent dig at her ex-husband Stephen Belafonte, Mel B said, “Make sure you get a prenup.”

“OH MY GOD proposal onstage at #SpiceWorld2019 and Mel B says ‘make sure you sign a prenup’ I’m obsessed,” one fan wrote on Twitter.

Christie got down on one knee to ask Watters to marry him. Watters said yes and the two kissed onstage.

Mel B, Mel C, Geri Halliwell and Emma Bunton then congratulated the pair, who are from Ireland.

The Spice Girls – minus Victoria Beckham – sang their classics including 2 Become 1, Wannabe and Say You’ll Be There at the concert at Manchester’s Etihad stadium.

The concert is part of a three-night run in Manchester as part of the Spice World reunion tour.

It’s the first time since the band have been onstage together since the 2012 Olympics in London.

The Spice Girls’ long-awaited reunion tour kicked off on May 24 with a sold-out show in Croke Park, Dublin and a new inclusive mantra for LGBT+ fans.

Ahead of the first concert of the Spice World 2019 tour, Sporty, Scary, Ginger and Baby released a new raft of merchandise that brings their Girl Power ethos bang up to date for 2019.

A Spice Girls T-shirt designed by non-binary artist Kate Moross carries the message: “We welcome all ages, all races, all gender identities, all countries of origin, all sexual orientations, all religions and beliefs, all abilities.”

The Spice Girls announced the tour back in November 2018, six years after their last performance at the London 2012 Olympics. Originally a six-date engagement, demand saw the tour extend to 13 nights in cities including Cardiff, Manchester, Coventry, Edinburgh, Bristol and London.