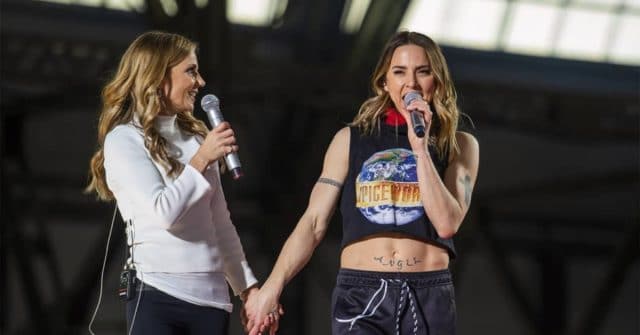 The Spice Girls’ long-awaited reunion tour kicks off on Friday (May 24) with a sold-out show in Croke Park, Dublin and a new inclusive mantra for LGBT+ fans.

Ahead of the first concert of the Spice World 2019 tour, Sporty, Scary, Ginger and Baby have released a new raft of merchandise which brings their Girl Power ethos bang up to date for 2019.

A Spice Girls t-shirt designed by non-binary artist Kate Moross carries the message: “We welcome all ages, all races, all gender identities, all countries of origin, all sexual orientations, all religions and beliefs, all abilities.”

The new design is an exciting teaser for the tour, the band’s first in more than a decade.

The Spice Girls announced the jaunt back in November 2018, six years after their last performance at the London 2012 Olympics. Originally a six-date engagement, demand saw the tour extend to 13 nights in cities including Cardiff, Manchester, Coventry, Edinburgh, Bristol and London.

The shows will mark the first time that Emma, Melanie C,Geri and Mel B have performed as a four-piece without Victoria Beckham, who opted out of the tour to focus on her namesake fashion brand.

“Good luck to the girls today as they start their tour,” she wrote, adding the hashtag “#friendshipneverends.”

Though it was her choice not to join the tour, Beckham has found not being a part of the reunion “emotional,” according to her husband David Beckham.

“As someone that has lived with Posh Spice for the last 23 years I know how emotional today is going to be,” he wrote on an Instagram story on Friday.

“I want to wish the girls good luck with their amazing tour.”

The first details from the show emerged on Tuesday (May 21) when the official Spice Girls Instagram page shared a preview of the stage design.

The band will perform under a giant Spice World globe, inspired by their 1997 album.

On Friday (May 24) fans were given a sneak peek at the band’s outfits for the shows, which costume designer Gabriella Slade has said are “respectful of their legacy.”

“There’s a definite honouring of the ’90s, but with a contemporary twist,” she told Vogue.

“I really wanted to bring back a sense of what the Spice Girls were, what they stood for.”

Geri—who has dyed her hair ginger in preparation for the shows—has revealed that she will take to the stage in a reimagined Union Jack dress.