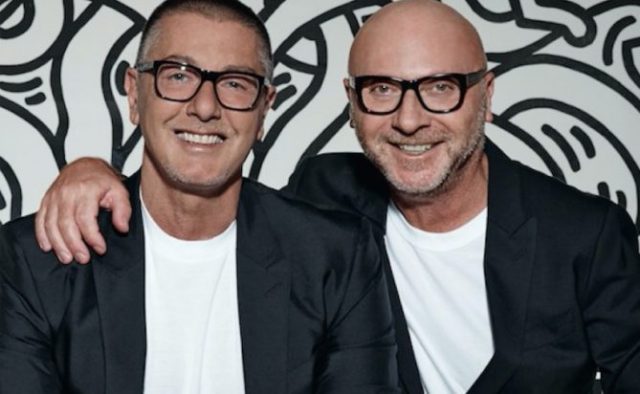 First, he shared a photo on Instagram of a certain incoming first lady wearing one of his dresses:

This in and of itself was something of a statement, as there has been a divide in the fashion world over who is willing to dress Melania Trump. It’s a weird debate, but a debate nonetheless.

On the one hand, there are designers like Tom Ford, Marc Jacobs, Christian Siriano, Sophie Theallet and Humberto Leon — all of whom have all said they will not work with the Trumps. Then there’s people like Calvin Klein who has said “of course” he’d work for Melania if he was asked, a sentiment echoed by Diane von Furstenberg and Tommy Hilfiger. For the record, nobody appears to be asking.

Understandably, there’s been backlash against Gabbana’s Insta-endorsement (to be fair, there’s also considerable support), with one commenter writing, “Sad when a gay designer doesn’t care about other groups being repressed.”

The tone-deaf comment, implying masculinity is somehow at odds with sexuality, is oddly reminiscent of a stance the designing duo and former couple took on gay adoption in 2015.

In the Italian magazine Panorama, they said, “We oppose gay adoptions. The only family is the traditional one. No chemical offsprings and rented uterus: life has a natural flow, there are things that should not be changed.”

That position was later backtracked following a loud cry to boycott the D&G brand, amplified by celebrities like Elton John, Victoria Beckham and Ricky Martin.