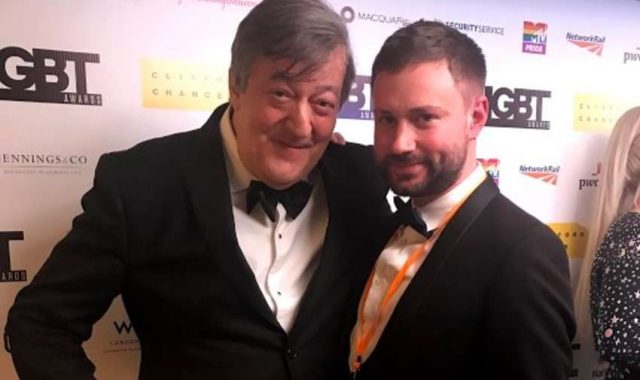 Veteran British TV stars Stephen Fry and Paul O’Grady were among the big winners at tonight’s British LGBT Awards in London, alongside US stars like Cynthia Nixon and Hayley Kiyoko.

Stephen Fry was honored with the Lifetime Achievement award for his lifelong record of championing LGBT+ rights and fight against mental health stigma. Emeli Sande presented Fry with his award.

Sande described him as a ‘hero of the people fighting inequality and discrimination all over the world.’

O’Grady, known for his drag character, Lily Savage, was recognized with the prestigious ‘Trailblazer’ accolade.

Marjorie Strachan, of British LGBT Awards founding partner, NatWest, said: ‘The awards are about more than recognising the nominees and winners, they are about creating a change in attitudes towards diversity and inclusion in every part of the UK. This is something that we are committed to, and proud to celebrate.’

Sarah Garrett MBE, founder of the British LGBT Awards, said: ‘Every year the British LGBT Awards gets bigger and better. Each and every one of our winners and nominees continue to make the world a better place for the LGBT+ community, using their platform to advance the rights of our community and educate people in Britain and beyond about the need for equality.’

‘It’s peculiar to be awarded for something I would have been in prison for during the first 20 years of my life.’

When asked about issues affecting the LGBTI community in 2019 he holds close to his heart, Fry responded: ‘Yes. It’s the rising tide of fascism. It may be a different form of fascism that destroyed the world in the 1930s and 40s, but it’s got the same stench, the same hatred.

‘It’s a frightening thing and it means we do have to stay together and keep fighting.’

He continued, saying people ‘have to be smarter’ and though it’s a cliché, the ‘arrow of the arc of history does bend towards justice’.

When considering his home of the UK, Fry immediately responded that Northern Ireland is of utmost concern and it must ‘get in line’ with the rest of the island nation.

‘Most people do support this, it’s only a small but loud group who don’t,’ he continued. ‘Even in the America, where there is some of the worst homophobia, you can have trans and queer people elected.’