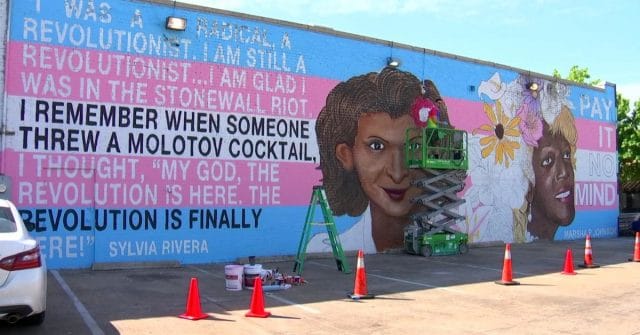 The 50th anniversary of the Stonewall riots has been marked by activists in Texas with a new mural, painted to honour the transgender women who were key figures in the protests.

The new mural, which is the largest mural in the US, is on the side of a building in Cedar Springs, Dallas.

“This mural represents the trans women of colour who were key figures in that riot and also key figures in start of the queer liberation movement,” artist Brian Kenny told NBCDFW.

The protests at the Stonewall Inn in New York City happened in June 1969 as a response to a police raid against the LGBTQ+ patrons of the Inn.

The protests are often credited as the beginning of the modern gay rights movement. The new mural in Cedar Springs shows two women, Marsha P. Johnson and Sylvia Rivera, who were part of the Stonewall riots and are thought of as two pioneers of the gay rights movement.

“This mural is to honour them and to give more visibility, love and attention to the transgender community,” Kenny said.

“I had Marsha looking up and next to her is a very famous quote of hers – ‘pay it no mind,’” Kenny said. “Because she was always above it all. She never let anything get to her. She was accepting of everybody.”

“I had Sylvia Rivera looking right at the viewer because she was the one who was always in your face – screaming into the microphone for gay rights,” Kenny added.

Dallas-based activist group Artitude are behind the mural and said that parts of the LGBT+ neighbourhoods in Dallas are being gentrified.

“People are moving away from this area and so we are trying to bring back the community here and I think having things like this whether it’s performances or mural art it’s such an important thing,” said Rafiq Salleh-Flowers of Artitude.