Home Gay Life Straight athlete blasts homophobia in soccer: ‘We have a lot to learn... 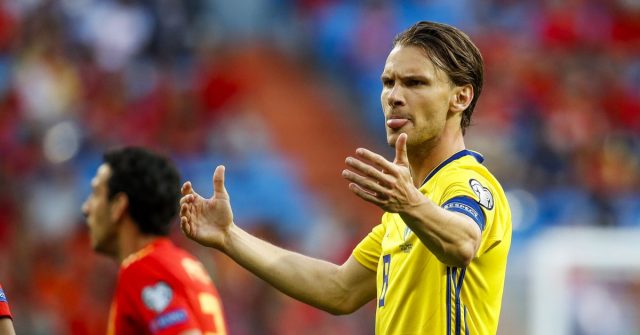 Albin Ekdal might not be a household name outside Europe, but the midfielder for Sweden’s national team and Italy’s Sampdoria has a message he wants soccer players all around the world to hear: men’s soccer can learn a lot from women’s soccer when it comes to acceptance of gay athletes.

“We have a lot to learn from them in this aspect,” Ekdal told Sport Bladet in an interview recorded in Italy and picked up by UK Yahoo Sports and Goal.com

“There is obviously a greater acceptance. Women are probably smarter and more civilized in a group than men can be. But we should absolutely learn from how they’ve done it, because you obviously wish that it would be as accepted among men as among women to show your love. It doesn’t define who you are, just who you’re in love with. It should affect the football extremely little but sadly those problems are still here in 2019.”

Prior to the interview, the captain recorded a 90-second video that is now posted online. It features Ekdal sitting in front of the rainbow flag. speaking in Swedish — with English subtitles — but his message is universal.

“No homosexual men play football, they say. How did we let it come to this? My name is Albin Ekdal and I have played football in two of the biggest leagues in the world. I have participated in both the European Championships and the World Cup but I have still never stood on the same pitch as an openly homosexal player. The issue can’t be shown more clearly than that.

“Elite football pushes away homosexuals, or puts pressure on boys to be quiet as something as natural as who they love. We must support the boy who is right now thinking about quitting not to get mocked, who might have heard the word ‘faggot’ be used as an abuse in the locker room. Because it’s not the individual boy’s responsibility to dare.

“It is mine, yours and everyone else’s task to make sure that you don’t need to be brave to come out. It should be simple and fun to tell people that you’re in love. I can’t do more than welcoming everyone into the world of football. Neither can you.

“But if we do it together, in every stand, on every bus trip, on each away game and in every changing room, then soon we won’t have this problem anymore.”

Following the recording of the video, Sportbladet asked Ekdal — who just turned 30 — a few questions.

Is there any difference between a homosexual and a heterosexual player?

“No. Obviously not. One hardly knows how to respond to such a question. It’s just about who you like and who you’re in love with. Technical skills, finishes, speed or game intelligence has nothing to do with that.”

“It should be obvious that also gay people shall be open with who they are in football. However, there are hardly any gay people, so we have a problem. And therefore I think it’s about time we change that.”

How do you perceive the attitude towards gay people in Italy?

“Just like in Sweden and in the rest of the world, there are some people who are a little bit homophobic. That’s how it is everywhere. It feels so obvious that everyone should be able to love whoever they want, but unfortunately that isn’t always the case.”

“Most people behaved as they should but the homophobia was still there. Insults such as ‘faggot’ and other things existed. I’m sure they still exist among boys in changing rooms and classrooms. If I would’ve been gay and heard all of that it would’ve made it much harder to come out. I bet it has stuck around today, so even though you don’t mean to hurt anyone it’s important to think about what you say.”

“At the end of the day it can lead to many good players quitting. Hopefully, there aren’t too many stopping to play because of this, because everyone should obviously be able to play football regardless of who they love. But every person forced to quit is a double loss: primarily for the individual but also for football at large.”

Do you remember when you fell in love as a teenager?

“Yes, I am in love with the same girl that I fell in love with back then. We have been together since I was 17 so I remember it well.”

Did falling in love make you a better player?

“Yes, you obviously get a different harmony when you’re in love. A safety. So it probably contributes to you becoming a better player, since love gives energy and joy.”

What do you say about boys who are in love with boys not being able to get that boost as a player if they have to keep everything happening off the pitch inside of themselves?

“That I wish that they could get to tell. It is everyone’s right to be able to be in love with whoever they want. That’s nothing one should feel a need to hide or feel ashamed of, it should be fun. I really hope that it will get better when it comes to this. It would be great for society if gay men could play football without having to take any shit for it. It would be cool to see it too.”

What are your feelings about how few openly gay soccer players there are in the world? Some say there are only eight.

“That’s extremely few. Either there are many, many more who don’t want to come out, or they’ve already quit. Both options are equally bad. I hope that there can be a domino effect, that one dares, someone comes after and that in a couple of years it’s completely normal. That’s my hope.”