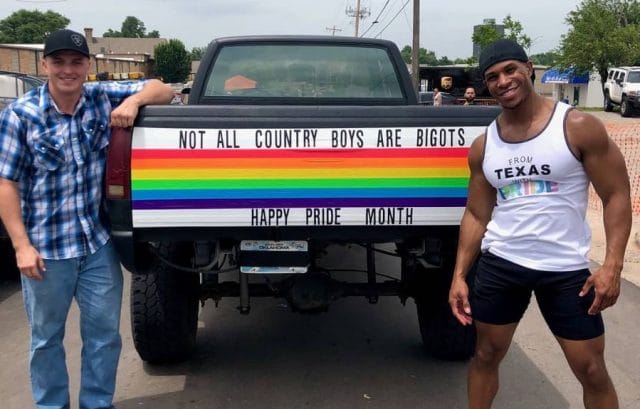 Cody Barlow, the self-described straight “country boy” who made headlines earlier this month with his viral rainbow pride pickup truck, was greeted with cheers and hugs as he took part in Saturday’s Oklahoma City Pride parade.

The Navy veteran, who lives in Wagoner, Oklahoma, was invited to participate join the parade by the staff of a local LGBT newspaper in Oklahoma City.

Barlow’s pickup truck became a viral internet sensation when he posted a photo on Facebook that showed his truck’s tailgate decorated with rainbow colors and the message “Not all country boys are bigots. Happy pride month.”

He explains that he “simply bought rolls of brightly colored duct tape and ran them across my tailgate in the design of the pride flag, and added some mailbox letters.”

“This is important to me, not only because I have family and friends that are LGBTQ+, but also because countless people have dealt with hatred and judgement simply for who they are, and/or who they love, for far too long,” he wrote. “Obviously doing this isn’t going to change the minds of those who are intolerant, but hopefully it can help drown out the hatred with love.”

“I live in a rural area in Oklahoma, surrounded by small towns in every direction, and I’m sure this is not a very welcome message around here, but this is going to be displayed on my truck for the entire month of June in support of pride month,” Barlow added.

He continued: “I don’t think it is necessary to say, but for all intents and purposes I am a straight man that grew up here in Oklahoma. I love taking my truck mudding, going fishing, swimming at the lake, floating the river, and several other ‘country’ activities. It doesn’t matter what negativity I receive for supporting this. I hope that this can help even the slightest bit to encourage and support at least one person that needs it.”

“I would love to shake your hand or give you a hug and talk to you. Your stories mean a lot to me…I want to come support all of you. Don’t be hesitant to approach me, I’m just an average guy,” Barlow wrote after the parade.