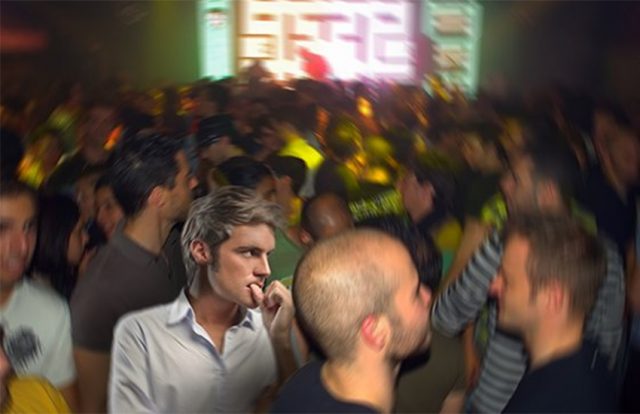 Berlin’s Berghain is often cited as the world’s best club – but for a straight guy from San Antonio, it turned out to be opposite.

Kyle, a (presumably) straight guy who was on holiday in Berlin, didn’t seem to have a clue what what he was getting into when two newly-made friends took him along.

The famous club, said to have the hardest door in Berlin, operates a strict no pictures-policy and is known for its gay sex parties, usually held in the basement, and the general ‘anything goes’ attitude of partygoers, no matter if we’re talking drugs or sex.

What happens in Berghain stays in Berghain – unless you’re Kyle, and work through your nightly adventures in a hilariously honest, and slightly shocked, Yelp review.

It all started compartively harmless, he said, with the guys cutting the queue and cussing Kyle out because he was checking his phone.

You don’t just check your phone while waiting to get into Berghain, because if you do, you might not get in. But once they were in, things got real and very much NSFW. And Kyle really, really wasn’t prepared.

‘They offer me these strange looking little pills and I pass. No drugs for me. They both pop them and then start making out,’ he says.

‘I’m not talking about a little kiss or a peck, I’m talking open-mouth, tongue kissing.’

Learning his new friends were gay was only step one, though, I look around and there are 3 or 4 naked guys dancing all crazy with erections.

‘I decide to go get a beer and I tell myself—maybe I’m in the wrong part of the club. Maybe this is the gay section.

‘Nope. The whole club is the gay section!’ Trying to soothe his initial shock with a beer, Kyle would soon learn that there really are no boundaries inside Berghain.

‘I pass in disbelief, a bearded guy butt fucking the crap out of another bearded dude. You could smell feces and sweat.

‘I take my eyes off of that situation and it only gets worse.

‘There’s another guy, and I kid you not…he’s got his arm, almost to his elbow, up another guys ass! I thought it was a magic trick or an illusion. It WASN’T! The guy that’s basically getting impaled is enjoying it!’

‘I saw one guy getting tag teamed (double penetration style) by 2 guys! I said to hell with this…I’m out of here!’

There’s only one problem: one of Kyle’s new friends has his phone, so he’ll have to find him before he can make off.

And of course, more adventures await. ‘This Nazi looking guy comes up to me with a syringe and acts like he’s going to stick me with it.

‘I jump back and think about beating the shit out of him and he starts laughing and in very bad English says “You vant chemical to keep wake and make you high?”…

‘Evidently, you are supposed to ejaculate on the floor and make it slippy and then naked guys go sliding through it! WTF!

‘I look back and that vampire looking dude is jerking off in my direction. I throw a beer bottle at him and start hauling [my] ass out of there.

‘I run past this one guy that seems to be injured and he’s asking for help. I’m a pretty nice guy, so I ask what happened.

‘He bends over and you can see this silicone/rubber looking object barely protruding out of his butt. You could barely see it.

‘He then explains that he had shoved a rubber arm with fist up there and it was stuck! This guy thinks I’m going to help pull it out?!?

‘Get the fuck out of here!

‘I finally get to the exit and I yell to that weirdo door man “YOU SICK BASTARD!”…

‘I hail a cab and make it back to my hotel. That was my experience at the “worlds coolest night club”..

‘I can handle a lot of stuff, but this place was WAY over the top. I will not be back. Never.’