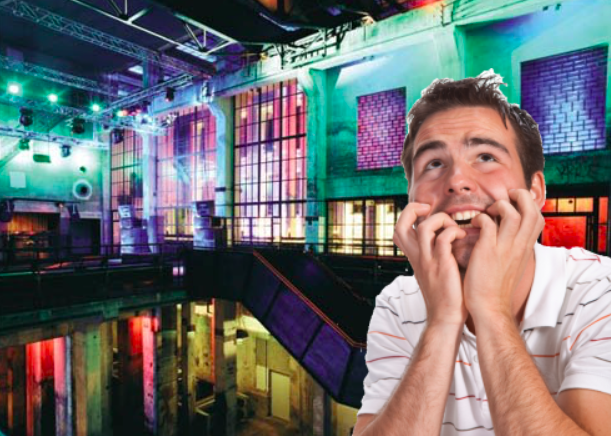 What happens when a straight guy unwittingly walks into a gay club in Berlin? You’re about to find out.

According to his Yelp profile, Kyle W. lives in San Antonio, TX and has a passion for gentlemen’s clubs, strip joints, dive bars, and fast food restaurants. A few weeks ago, he was in Berlin, where he learned about a popular gentlemen’s club called Berghain.

In a recently published Yelp review, Kyle explains that he heard about the club from some guys from London who he met while hanging out at his hotel bar.

“They seemed normal and told me they were getting ready to head to the worlds coolest night club,” he explains. “I figure it’s Saturday night…what the hell. So I ask them if I can tag along.”

Apparently, the men neglected to mention it was a sex-positive dance megaplex that caters to gay men.

When they got to Berghain, the first thing Kyle noticed was the music, which he says was “blasting too loud.” But what really took him by surprise was the clientele in the club:

I look around and there are 3 or 4 naked guys dancing all crazy with erections. I decide to go get a beer and I tell myself—maybe I’m in the wrong part of the club? Maybe this is the gay section. Nope. The whole club is the gay section!

From there, it only got more intense. Kyle says he left his companions to go to the bar and order a drink:

On the way to grab a beer, I pass in disbelief, a bearded guy butt fucking the crap out of another bearded dude … There’s another guy, and I kid you not…he’s got his arm, almost to his elbow, up another guys ass! I thought it was a magic trick or an illusion. It WASN’T!

At this point, Kyle decided it was time to leave.

“As I’m leaving, I remember that one of those Londoner’s has my phone. So I need to go to find him,” Kyle says.

On his way back to where he had left his companions, Kyle’s nightmare worsens:

This Nazi looking guy comes up to me with a syringe and acts like he’s going to stick me with it. I jump back and think about beating the shit out of him and he starts laughing and in very bad English says “You vant chemical to keep wake and make you high?”…As I’m saying “NO!”

Everything came to a head shortly after that when Kyle, still searching for his companions, passed by a man who asked for a little assistance:

He bends over and you can see this silicone/rubber looking object barely protruding out of his butt. You could barely see it. He then explains that he had shoved a rubber arm with fist up there and it was stuck! This guy thinks I’m going to help pull it out?!? Get the fuck out of here!

Foregoing his phone, Kyle bolted for the exit, hailed a cab, and hightailed it back to his hotel.

“That was my experience at the ‘worlds coolest night club’,” he writes. “I can handle a lot of stuff, but this place was WAY over the top. I will not be back. Never.”