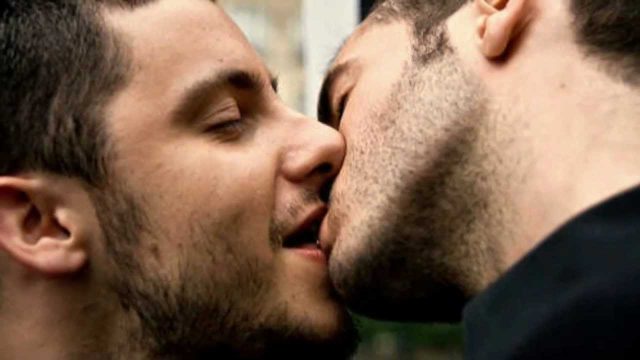 Congratulations and welcome out to the confused saga of a Reddit user who posted about accepting a date from another guy, despite always having thought of himself as straight.

The entire story is pretty sweet, but the condensed version is that he just got out of a long relationship with a woman, and happened to sit down next to a guy on a train and started making small talk. They had good chemistry and got closer over their train ride, and at some point the user realized that he was getting nervous and flirty and romantic. It was a completely unexpected experience for him — and yet who can say no to the pleasures of being wooed?

And so he went along with it, flirting back, and eventually exchanged phone numbers and made plans for a movie-cuddle date at his place.

Now he’s feeling excited and a little nervous because he has no idea how to have sex with men or even what his sexuality is, so he’s asked Reddit for some advice. Here’s ours:

First, it doesn’t matter what your sexuality is, or what you call yourself. The best dating advice we’ve ever heard was on the podcast Throwing Shade and it was to meet people you like and then spend time with them.

Third — and this is our favorite part — explore a little of the community you’ve discovered. Maybe you want to be a part of it, maybe not. Up to you. There’s more to being gay or bi or queer (or whatever) than just who you fall in love with — there’s a whole world of movies and parties and slang and celebrities and art and history and science that straight people usually never even notice. Start with a sampler-platter of LGBT culture (the Sewers of Paris podcast is a good start), see what you like, and go from there.

I’ve been in a relationship for the last five years, but we broke up over the summer. I’m trying not to get into anything new, and just enjoy my time in the city as a single guy for the first time as an adult. I’ve slept with a few women since the break up, been on a dozen dates or so. All casual.

Anyway, today I’m sitting and waiting for the metro to go home from work and this guy sits down next to me. The train was delayed, and he mentions he hates waiting more than a few minutes because there’s no cell service underground. I tell him my trick is to load up an interesting article on my phone before coming down, and I read that while waiting.

He asks me about the article, and we talk about it for a few minutes. We talk about where we’re taking the train to (I’m going home, he’s going to dance practice).

The train comes, and I take a seat. He asks if he can take the seat next to me, and I say of course. Now, this guy was fairly effeminate so I figured he was probably chatting me up because he was interested, but he wasn’t being flirty and I love talking to people, so I didn’t want to throw out a “by the way I’m straight.”

I ask him about his dancing, he asks me about work. He’s actually pretty easy to talk to, and we’re making each other laugh, so I’m enjoying the conversation. He finally gives me his name, and I give him mine. We shake hands, and he gives me the most flirtatious eye contact I have ever had.

I felt it like a jolt of electricity through my body. And in a moment things were just different. I suddenly found myself thinking “oh, this guy is pretty good looking” and then all of a sudden I realize I’m talking to a very handsome man who seems to be interested in me, and I get nervous. I realize as we’re talking further that I’m…kind of trying to impress him? All of a sudden I care about his opinion of me, and I’m building up myself up a little bit subtley. it was literally like something had awakened in me all at once.

I get in my head, like “what am I doing, this is a guy, and I’m very straight.” At this point, he notices that I’m kind of tearing at the label of my water bottle and asks me with a smile if I’m nervous. I say no, and kind of…shyly laugh? I’m surprising myself, literally thinking “am I a straight guy being coy and flirty with a man I just met on the subway? Why am I doing this? What is happening?”

He says, “you’re cute, [my name]. Would you want to go out with me on Friday?” And I looked up at him, and as excitedly as if a beautiful woman had asked me the same question, I respond with an enthusiastic “sure, I’d love to.” Literally in shock, beside myself.

We exchange phone numbers, and have really light and vibrant conversation the whole way to my stop. I get off and he says “text me, I’m looking forward to Friday!”

I texted him almost immediately, and we hammer out the details of our date. We’re meeting up for a movie date at my apartment. He says he wants to watch a scary movie, but that he may need me to be strong for him since he startles easily. It’s all turning me on and I’m feeling butterfly-y, I keep replaying the conversation in my head, and smiling the whole walk from the metro stop to my apartment. The whole while thinking what in the hell just happened?!

All of this is just so weirdly exciting. I left the house this morning a heterosexual man who never really entertained the idea of being with another man, and returned with a date set up with a handsome man who’s coming over to my apartment to cuddle and a watch a movie!. What?!

And I’m weirdly way more excited than the dates I’ve been on with women since my break up. I have no idea if I’ll sleep with him on Friday or what (I don’t know the first thing about having gay sex, honestly, so if anybody here has tips, I’m all ears/eyes), but I’m just excited to see him again.

I have no idea what this means for me or my sexuality, but I’m a little nervous and kind of pumped for possibly a new chapter in my life. I’ve been thinking about it, and I would be totally open to dating and falling in love with a man, if there’s a connection like this. I just never knew that I was capable of having one. men were always just buddies to me, you know?
I’m really excited, but also very confused. Why didn’t I ever really have gay thoughts before? Is this how people find out they’re into their own gender?
Can anyone relate or share similar anecdotes? I’m as perplexed as I am giddy.