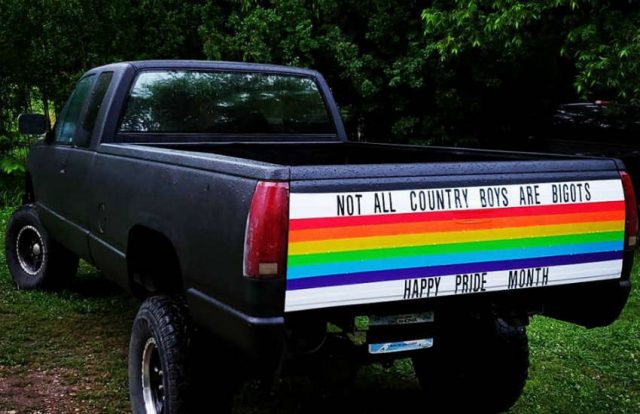 A straight man from rural Oklahoma is receiving praise for his message of support during Pride.

On 6 June, Cody Barlow shared a picture of his to Facebook.

‘Found a way to show my support for Pride month,’ Barlow wrote.

‘I simply bought rolls of brightly colored duct tape and ran them across my tailgate in the design of the Pride flag. And added some mailbox letters.’

The truck’s lettering reads ‘Not all country boys are bigots. Happy Pride Month.’

‘This is important to me, not only because I have family and friends that are LGBTQ+, but also because countless people have dealt with hatred and judgement simply for who they are, and/or who they love, for far too long,’ Barlow continued.

‘Obviously doing this isn’t going to change the minds of those who are intolerant, but hopefully it can help drown out the hatred with love.’

‘I live in a rural area in Oklahoma, surrounded by small towns in every direction. I’m sure this is not a very welcome message around here. But this is going to be displayed on my truck for the entire month of June in support of Pride month.’

‘I don’t think it is necessary to say, but for all intents and purposes I am a straight man that grew up here in Oklahoma. I love taking my truck mudding, going fishing, swimming at the lake, floating the river, and several other “country” activities.’

‘It doesn’t matter what negativity I receive for supporting this. I hope that this can help even the slightest bit to encourage and support at least one person that needs it.’

‘I hope everyone finds their inner strength to finally live life loud and proud without regard for the negativity of ignorant people.’

Oklahoma is not known to be a very LGBTI-friendly state. Last year, Oklahoma allowing discrimination against same-sex couples looking to adopt children. Additionally, a 12-year-old trans girl for using the girls bathroom at school. This experience influenced her family’s decision to . Back in 2017, a gay man’s in the state after his son was threatened and harassed.

According to the , Oklahoma was one of the states with a ‘high priority to achieve basic equality.’ This means they rank low when it comes to LGBTI rights and protections.