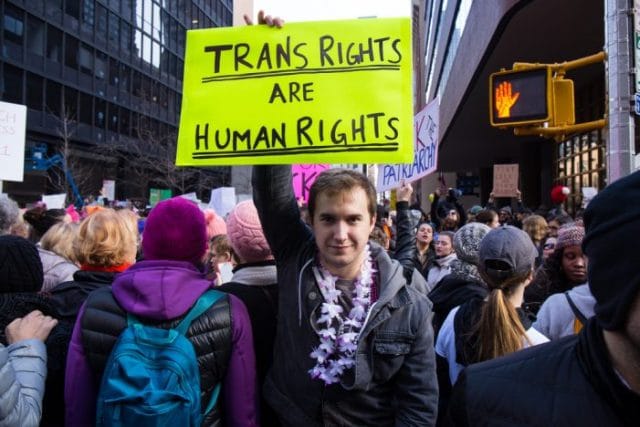 A poll released by the Public Religion Research Institute (PRRI) last month points to growing acceptance of transgender people, in spite of attacks by the Trump administration aimed at trans rights.

Support has also grown amongst religious groups, with Catholics leading the way at 60%. Nonwhite Protestants were 60% more supportive, and white mainland Protestants, 57%. Even 52% of white evangelical Protestants claimed to be more supportive than five years ago.

That Catholics have grown the most in support seems contradictory to guidance released this week by the Vatican’s Congregation for Catholic Education, who claim that teaching about gender identity would “annihilate the concept of nature.”

Above all other religious groups, however, it was religiously unaffiliated Americans who showed the greatest gains, with 60% of them claiming to have grown in their support of transgender people.

Age also played a factor in the polling, with young Americans ages 18-29 leading the way at 68%, while seniors age 65 and older showing more modest gains, at 56%.

The study flies in the face of actions taken by the Trump administration to put a damper on transgender rights, including barring transgender people from the military as well as moves to carve out exceptions to transgender healthcare and other federal protections.

“Generally, the Trump administration’s policy directions, such as refusing to collect data on transgender Americans and restricting transgender military service, are flying against the wind of support for transgender rights in the country,” said Jones.

“Virtually every demographic group in the country, including Republicans and white evangelical Protestants, report they have become more supportive of transgender rights over the last five years.”

The survey asked specifically about support for transgender military service, with more than six in ten (63%) Americans favoring trans troops. This number hasn’t moved much since 2017, with support among Republicans growing, while Democrats have slightly cooled on the issue.

The study also hints at what may be driving some of the gains in support, as the number of people who claim to have a close friend or family member who is transgender has more than doubled over the last eight years — and those who have a personal relationship with a transgender person tend to be more supportive overall.

The issue of transgender bathroom accommodations, however, remains a strong sticking point, and one of the few examples where transgender acceptance has not improved. A little more than  half (51%) of men surveyed support laws requiring transgender individuals to use bathrooms corresponding to their assigned sex, versus four in ten (40%) women. These numbers have grown in recent years.

The survey, conducted via phone and including both land line and cell phone users, covered a random sample of 1,100 adults who were 18 years or older, and living in the United States.