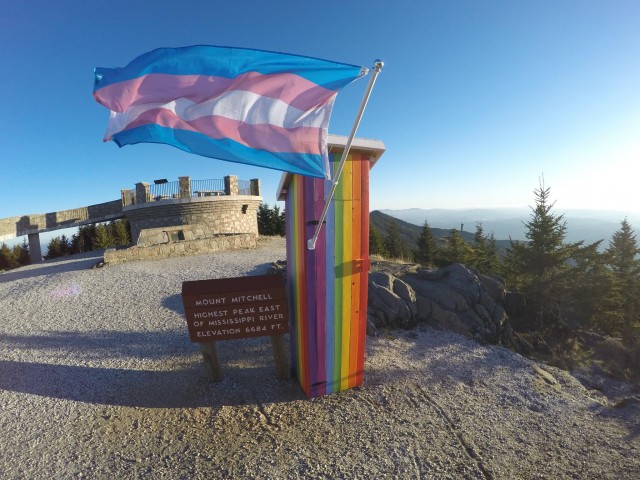 Lately, North Carolina was the center of attention, in a negative way, due to the anti-LGBT laws that the state has passed. Many celebrities bullied the state of Carolina by either canceling their shows there, or just speaking against the inhuman laws.

Next to participate at the protest is Survivor contestant, Neil Gottlieb. What he did is very imaginative. Gottlieb placed a rainbow house on the state’s tallest mountain. He also wrote a letter to NC Governor Pat McCrory attaching the photos with the rainbow house.

As of this morning, an outhouse proudly displaying a trans pride flag is sitting atop Mount Mitchell, North Carolina’s tallest mountain. It was placed there in protest of HB2, your state’s institutionalization of discrimination (also known as hate) against members of the trans community (also known as humans). Yes, at least for a little while, North Carolina’s highest point is an outhouse; a fitting symbol for a state that has sullied itself with shitty, repressive legislation.

You still support HB2, claiming it is for the people’s safety, but we all know this is just a load of crap. Government-back discrimination has no place in just societies. Soon enough HB2 will be reversed and your legacy will be skid marks in North Carolina’s history.

Of course you can admit that you shit the bed, reverse HB2 and wipe away the mess this harmful legislation leaves behind. We all make mistakes. Please stop dumping on freedom and admit your wrongs. We’ll all feel much better when this passes.
Trans is beautiful.

Bruce Springsteen, Pearl Jam, Cirque du Soleil, Bryan Adams and others canceled their shows in North Carolina as a manifestation against HB2. Lionsgate moved its production elsewhere and Sharon Stone changed the location of her new movie that was about to be filmed in Mississippi.