Home Gay Life Taipei Pride: 80,000 take to the streets to march for equality 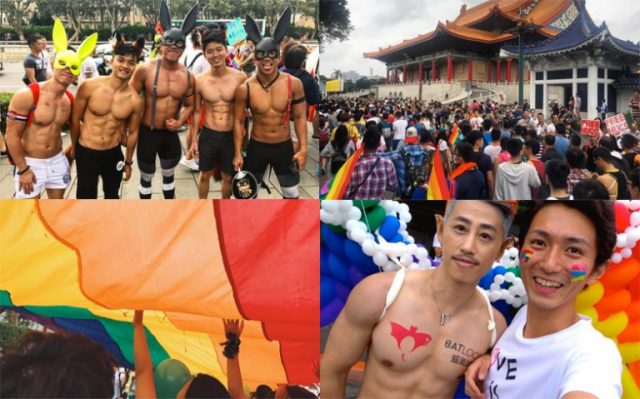 Tens of thousands of LGBT+ people and their allies took to the streets of Taiwan’s capital Taipei this weekend to celebrate the city’s annual Pride.

Many who marched this week carried placards calling for the legalisation of same-sex marriage.

Attendees marched past the presidential palace and at 2.30pm, two giant rainbow banners were unfurled and a brass band started playing.

Taiwan is considered one of the most liberal of the Asian countries in terms of human rights, and it’s widely believed they could be the first country in the region to introduce marriage equality.

This year’s Pride, and the fight for marriage equality, has special meaning as it follows the death of popular gay French teacher Jacques Picoux, who died after falling from the 10th floor of his apartment block.

Friends believe he had taken his own life, and blamed depression brought on after the death of his Taiwanese partner of 35 years, Tseng Ching-chao, who had been living with cancer, according to The Guardian.

Jacques, who taught at the National Taiwan University, had been denied the right to make decisions in Tseng’s final moments and later found had no legal claim over their shared property – all because they weren’t married.

Despite the tragedy, LGBT activists have called it a “pivotal moment” in the equal rights movement, and have placed pressure onto President Tsai Ing-wen, who pledged to improve equality when he was elected in January.

The ruling Democratic Progressive Party tabled a new draft bill earlier this week which aims to legalise same-sex marriage, and has been described as a “breakthrough” for equal rights.

DPP member Yu Mei-nu, who drafted the new law, said: “This story touched people. The LGBT group were very angry. It has put a lot of pressure on our party and on other parties.”

The DPP are widely considered sympathetic to the LGBT community.

The Taipei Times reported earlier this week on new measures that would allow homosexual DPP employees the same honeymoon leave and wedding gift entitlement that heterosexual couples get.

“The call for marriage equality feels stronger than last year,” Corinne Chiang, who works in IT, told the AFP news agency.
“We hope same-sex marriage can be realised as soon as possible so our child can have two legal moms.”

Check out some of the pictures from Taipei Pride 2016.