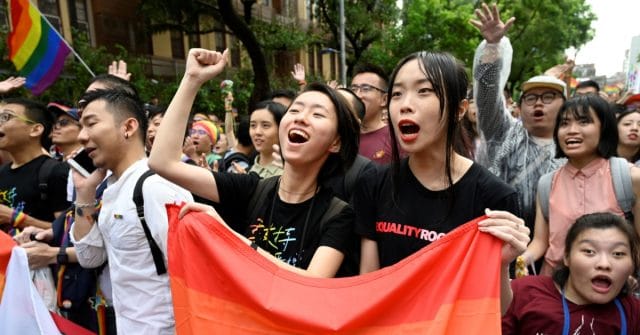 Legislators voted for a government-backed bill that would define a union between a same-sex couple as a marriage. Conservative opponents had proposed rival bills that would define partnerships as “same-sex unions” or “same-sex familial relationships.”

The law is due to come into force on 24 May.

Speaking at a weekly Cabinet meeting, Su said: “I would like to ask public servants to lead by example. Regardless of what your religion is and the values you believe in, please treat every couple registering for marriage equally and give them your blessing when providing relevant administrative services.

“Do not exhibit discriminatory behaviour or rhetoric of any kind.”

She also asked the Ministry of Education to ensure that school textbooks and teaching staff take the same-sex marriage act into consideration for the syllabus.

“No matter what your sexual orientation may be, we all belong to the same country and all live on the same land and under the same sky,” Su said.

“Only when we can tolerate and respect each other’s differences can Taiwan become a country of mutual respect and friendliness.”

Taiwan president Tsai Ing-wen’s Democratic Progressive Party pushed through its law in a vote on 17 May.

Prior to the vote, Tsai tweeted:”Good morning #Taiwan. Today, we have a chance to make history & show the world that progressive values can take root in an East Asian society.

“Today, we can show the world that #LoveWins.”

However, the new marriage certificates to appear on the Ministry of the Interior’s website will not contain the words “same-sex” according to legislator Kolas Yotaka.

A sociology professor at National Sun Yat-sen University had pointed out that a previous version of the certificate held by the ministry was specifically labeled “certificate of same-sex marriage,” according to the Central News Agency.

Yotaka said this was a template for internal reference only and that the certificates issued to newly-married couples would not contain the words “same-sex.”