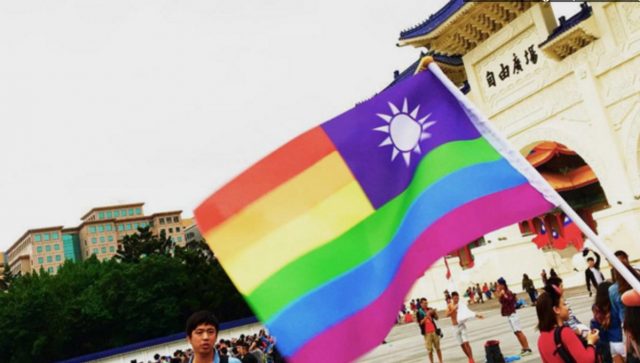 The bill seeks to change the existing gendered terms in the marriage law, such as ‘man and woman,’ to ‘the two parties.’

As one of the most progressive Asian nations in terms of gay rights, is Taiwan finally ready for marriage equality?

On Monday, ten legislators of the ruling Democratic Progressive Party (DPP) have announced that a proposal to amend the Civil Code to legalise same-sex marriage is currently in the works, according to Focus Taiwan.

Yu Mei-nu, a convener of the Judiciary and Organic Laws and Statutes Committee that’s working on the law change, said the bill will aim to alter the wording in the Civil Code.

Specifically, the amendment pinpoints Article 972 of the Civil Code and seeks to change the description for those who make commitments to marry from the current ‘man and woman’ (or male and female parties) to ‘the two parties.’

In this way, all married couples, gay or straight, will legally be able to assume spousal obligations, hold parental rights and have an equal opportunity to adopt children.

Yu said at a press conference in Taipei that the proposed law change would have to go through different rounds of vetting.

So far the amendment has the endorsement of 33 DPP legislators.

Other versions of the amendment coming from other parties and the government are still waiting to be collated before the proposal is sent to the Legislature for a thorough deliberation.

The caucus of New Power Party (NPP), an opposition party with five seats in the Legislature, announced at a press conference on Monday that its version of the Civil Code amendment will propose changing the terms ‘father and mother’ and ‘husband and wife’ to ‘spouse,’ ‘the two parties’ or ‘parents.’

NPP legislator Freddy Lim said he believes Taiwan ‘will certainly be the first country with equal marriage rights in Asia.’

Taiwan’s first female president Tsai Ing-wen who was elected in January 2016 has been vocal with her support for same-sex marriage, even during her race for presidency.

The biggest singers in the Mando-pop industry have also been very passionate and enthusiastic in pushing for public support and acceptance of marriage equality in the country.

However, the religious parties in Taiwan have been trying to impede the nation’s move to give equal rights to gay couples.

Earlier this month, veteran actor Lee Tien-chu, who shared the Lord’s Prayer on stage as he accepted the Golden Bell ‘Best Actor in a Miniseries or Television Film’ Award, went on a homophobic rant backstage, saying that ‘homosexuality is a huge curse to the future generation.’