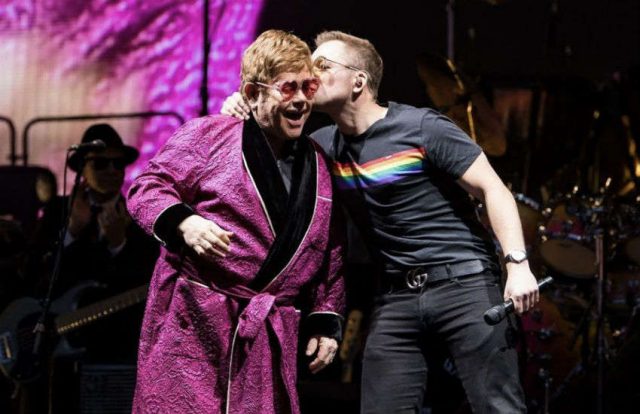 Although Egerton and Elton performed together briefly on the beach at the Cannes Film Festival last month, following the movie’s world premiere, this is the first time Egerton has joined the singer and pianist in front of such a large, paying audience. John perfomed at Hove County Ground.

The two men performed the track Your Song, taken from Elton’s 1970, self-titled second album. Egerton wore a T-shirt emblazoned with the rainbow flag.

Afterwards, Elton posted a message to .

‘What a show in Brighton just now ❤️ Taron, thank you for joining me onstage tonight. We’ve shared so many moments during the filming and release of #Rocketman and singing ‘Your Song’ with you this evening is another I’ll always cherish.’

Egerton posted the same picture, simply : ‘Well … that was fun!’

Rocketman was released 22 June in the UK and a week later in 29 other markets, including the US. It co-stars Jamie Bell, Richard Madden and Bryce Dallas-Howard. The movie has met with generally favourable reviews, scoring 91% among critics on and 88% with audiences.

To date, it has taken $101million (€90million) in box office receipts, against a production budget of $40million (€35million).

Elton’s Farewell Yellow Brick Road tour kicked off in September 2018. It includes 300 dates across the globe and has already taken in excess of $125million (€111million).