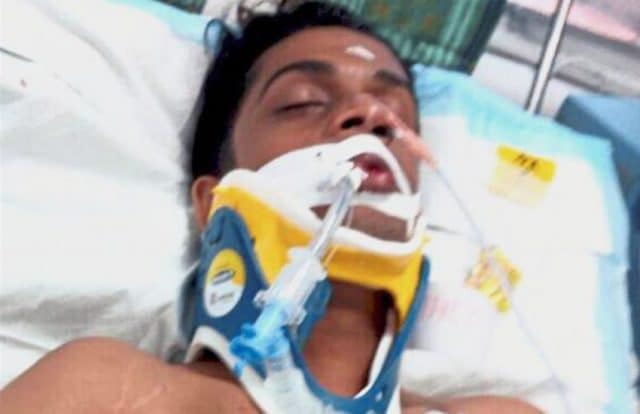 His attackers called him pondan (f****t) as they beat, burned and raped him

An 18-year-old student who was viciously beaten, burnt and raped with a blunt object has died from his injuries.

T Nhaveen was attacked on Saturday at about 2.20am in a field in George Town, Penang – an island in Malaysia.

He was left brain dead and hospitalised. Nhaveen died on Thursday at 5.31pm (Penang time) according to a report in The Star.

Nhaveen was attacked a day before he was due to move to Kuala Lumpur to study music composition at college.

The group of young people were alleged homophobes who whilst attacking Nhaveen called more friends to the park to join in the attack.

Two of his attackers called Nhaveen a ‘pondan’, a Malay term which translates to gay or f****t.

Nhaveen and a friend of his – who managed to escape with a crushed cheekbone and alerted his uncle to the incident – were beaten with helmets.

The teenager was treated for severe head injuries, a wound on his groin and burns on his back. His anus was torn badly, likely due to a blunt object being inserted inside.

Five people aged between 16 and 18, have been detained for rioting, with police confirming their remand has been extended after Nhaveen’s death. They have all reportedly admitted to being involved in the incident.

His aunt said: ‘He loves music… Nhaveen is so friendly and jovial. I spoke to him last week and he wanted to come over to my place for chicken curry.’

Try them as adults

‘I urge for this case to be dealt under the Penal Code and not the Child Act,’ she told media outside of a wake held for Nahveen.

‘The one thing his mother asked me was this to be the last case and not let it happen to anyone else’s child.

‘She is a single mother and they were a close family.’