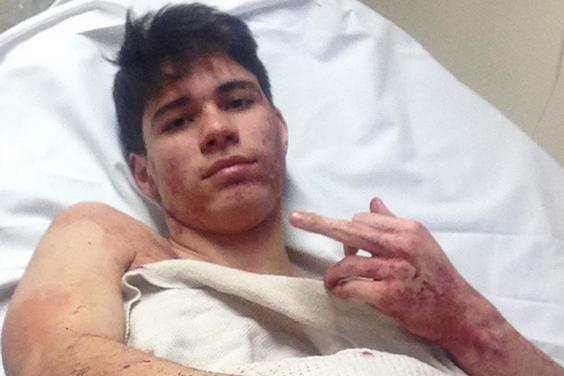 When Paul Jefferies’ corpse was discovered, investigators counted over 40 injuries on the customs official, including a slashed throat.

As The Standard reports, the 52-year-old was found naked with a tea towel tied around his head.

He was slumped across the kitchen floor at his home in East Sussex, where he’d moved from London after a romantic relationship dissolved.

On February 23, 18-year-old Ben Bamford murdered Jefferies with intent to rob him in order to pay off a £400 drug debt.

During his trial, Bamford denied murder, arguing that Jefferies had “come on to him” and he was protecting himself from his advances.

Bamford remained stoic as the verdict was announced after three hours of deliberation.

He’d met Jefferies through Grindr two years prior, when he was just 15. They picked up contact again in December 2015.

Little did Jefferies know that the young man was “desperate” to settle his drug debts and being pressured by a drug dealer.

He told the court he’d hoped Jefferies would give him money, as he’d done during previous encounters.

The reason he stabbed Jefferies, he claimed, was because he “got on top of me.”

He said the man continued having sex with him despite his protests.

Leaving the older man for dead, he drove his Audi TT to pick up a friend on the way to Eastbourne District General Hospital.

Jurors were given a selfie of Bamford, in which he flicked off his middle finger from a hospital bed. He claims he harmed himself in order to avoid police involvement.

Annmarie Bamford, the murderer’s mother, told jurors she was “dumbfounded” when he told her he’d killed someone while recuperating from his injuries.

“I kept saying that I need to know what’s happening,” she said. “And then he shouted, ‘I think I’ve killed somebody.’”

She went online to find anything that corroborated his story, and eventually came across a report of Jefferies’ death.

This was a horrific attack by a teenage boy who preyed on his victim with the aim of exploiting him for money.

The level of violence he inflicted on Paul Jefferies was extreme and then he fled the scene in his victim’s car. He showed no remorse, smirking for a selfie photo just hours later.

However, the jury did not believe his story.

“Although this can never undo what he has done, I hope it will bring some justice for Paul’s family, friends and colleagues.”

According to friends, Jefferies was a “warm and humorous man.”

Adrian Cooper, deputy director of specialist personal tax at HMRC, described him as “a highly valued colleague and friend.”