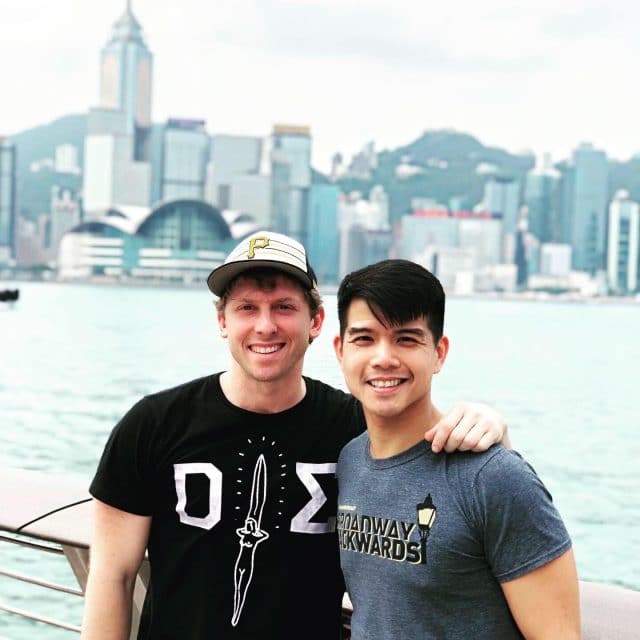 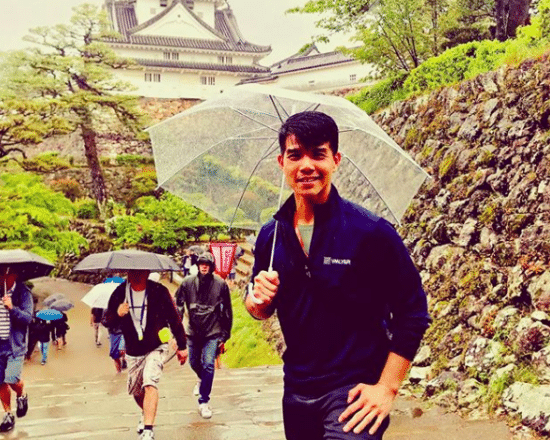 Fans of Broadway will recognize Telly Leung from playing the title role in Disney’s Aladdin, and TV audiences may remember him as “Wes the Warbler” on Glee.

Most recently, he made 2,000 new friends on Atlantis Event’s cruise from Hong Kong to Tokyo, where he sang songs from his two solo albums, “I’ll Cover You” and “Songs for You,” as well as songs from his career on Broadway.

He had such a good time, exploring the different cities and eating as much street food as possible, Wanderlust asked him to share thoughts from his time on the trip.

Take a look at what he had to say about squid balls, boys in Speedos, and how friendly everybody was on the ship.

Hong Kong is a major metropolis with the best “hole in the wall” eats. Walked around Tsim Sha Tsui (above), the main district for shopping and museums, with my bestie Leo and had wonton soup. How do I know where to eat? Look for the place with the line out the door of Hong Kong locals.

Sea Day means it’s also a show day for me and many of the entertainers. The waters were a little rough this day between Hong Kong and Taipei. I had a rehearsal with the ship band, and I spent most of the day trying to maintain my balance while singing. The seas calmed a bit by the evening and the show went great. We had a packed room.

Taipei is gay-friendly and has great night markets with delicious street food. Ate fried chicken from a street vendor, and ended the night with cocktails in the Red House gay district. Tons of outdoor bars here, side by side, which was great for mingling with the locals over a cold cocktail. Had some Red Bull vodka cocktails to help with the jet lag. 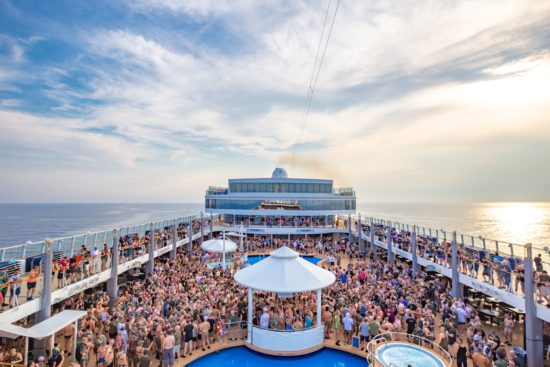 Another sea day, but this time we had gorgeous weather and all the boys were on the pool deck trying to get some sun and vitamin D. 2000 of my newest friends, in Speedos! Good times.

Shanghai is like New York on steroids. Everything is massive and smells like a brand new car. We wandered into the side streets for old-Shanghai and hidden dumpling shops. Had delicious pan-fried soup dumplings from YANG’s, and then washed it down with hot tea from this adorable tea shop we stumbled upon called Ding Li Teahouse. I made my bestie, Leo, try marinated pig ears, a childhood favorite of mine.

Another show day for me.  There were so many “show-queens” and Broadway fans on board that I wanted to do a special show just for them. So I changed up my set list, and I sang songs from shows I’ve done on Broadway, including Allegiance, Godspell, Rent and (of course) Aladdin. I also dragged Leo (a Broadway performer himself) for a song.

It’s all about the Castle. And the delicious, wood-fired bonito fish, which is a specialty of the area. The dish is called Katsuo No Tataki. This is a must if you’re in Kochi. You watch them sear it right in front of you. 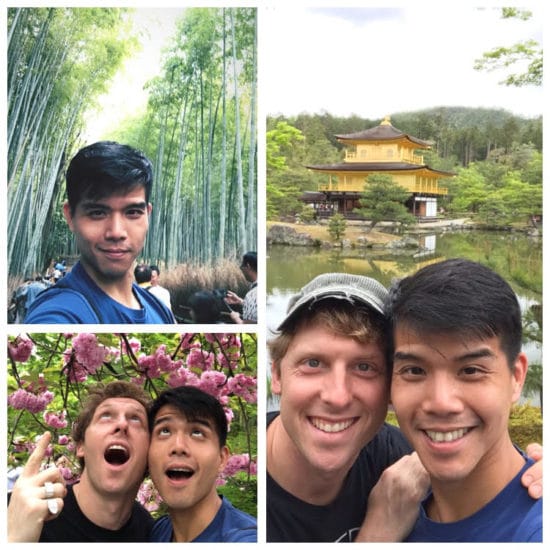 Osaka is an overwhelming assault to the senses. Tried the Takoyaki (squid balls) that are sold everywhere on the street. Sounds strange. Tastes heavenly. Just don’t burn your mouth. It’s hot hot hot! Then Osaka is only a short way to Kyoto, so we took a day trip. So glad we did. Kyoto was the highlight of the cruise. We did an 11-hour excursion and saw so many beautiful temples and palaces and shrines. The golden temple and the bamboo forest (photos above) took my breath away. Loved immersing myself in Japanese tradition and history in Kyoto.

Apparently, there are views of Mount Fuji from here. But it rained. So we didn’t see anything. We did, however, have delicious sushi from the fish market. You haven’t had real sushi until you’ve had it at a Japanese fish market. So fresh.

There are so many good spots to visit and so many amazing culinary delights in Tokyo. The highlight was the different types of tempura in the Asakusa district, which is a specialty in that area. I can eat tempura shrimp all day. But my favorite spot in Tokyo is the Meiji Jingu, a Shinto shrine in Yoyogi park, in the Harajuku district. The serenity of the Shinto shrines, and temples and the gardens in the middle this bustling metropolis, is a nice change of pace.

What is truly amazing to me is how these 2000 guys were able to connect, as one unit. Everyone says “hello” to everyone at dinner, in the elevator, at the shows. We say “hi” to each other and take photos for each other as we explore these amazing cities during the excursions. We’ve met people from all over the world and shared amazing international adventures with them, seeing temples and palaces. I’ve made a ton of new friends at this point. All the things that would separate us on land (age, body type, body hair, race, etc.) sorta disappear on the ship.

It forces me to ask: How do I bottle this up and take it home with me to NYC?