Home Gay Stars Ten years since Brokeback Mountain: A look behind the scenes 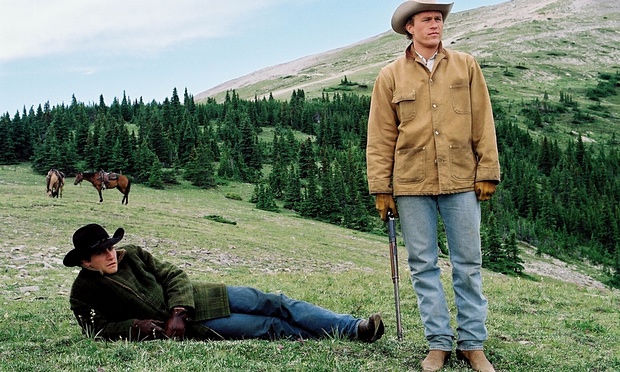 Ten years ago, one of the most successful gay love story movies has been produced and had a powerful impact on the audience as it reached $178 million worldwide. However, the controversy was real; it was banned in China and a cinema in Salt Lake City refused to run it. But the impact of the movie was not overshadowed by these incidents, coming in a time of change, in the early stages of the gay rights movement. For the tenth anniversary of the movie, Ang Lee (director), Jake Gyllenhaal (Jack Twist), Anne Hathaway (Lureen Newsome), Annie Proulx (writer), Diana Ossana(screenwriter), and Larry McMurtry (co-screenwriter) talk to Out Magazine about how the movie was born and grew into an iconic same-sex films ever made.

The movie, depicting the emotional and sexual relationship between two men living in the American West between 1963 and 1983 is drawn from a short story written by Annie Proulx.  The whole idea of creating the film came from Diana Ossana (screenwriter) after reading Proulx’s short story in The New Yorker in 1997. She contacted director Ang Lee who was reluctant at first but after reading the story he just could not take it out of his mind. This is what happened to almost all the people involved in the making of the movie, they were all emotionally touched, including the cast where the two protagonists are portrayed by Jake Gyllenhaal (Jack Twist) and Heath Ledger (Ennis Del Mar). “My closest family members, my godfathers, were a gay couple, so it was something I just inherently had no prejudice about,” Jake says to Out magazine.

While Jake Gyllenhaal was familiar with the subject, Heath Ledger was very serious about all aspects, being vehement about his steady perspective.

“He was extraordinarily serious about the political issues surrounding the movie when it came out, a lot of times people would want to have fun and joke about it, and he was vehement about being serious, to the point where he didn’t really want to hear about anything that was being made fun of,” says Jake Gyllenhaal about Ledger.

Living in a world where being a cowboy symbolizes the image of masculinity, an image given by society with political implications and where despite their occupation gay people are discriminated, Jack Twist and Ennis del Mar live a drama they cannot escape. Annie Proulx talks about this atypical situation that is actually a fact we don’t hear about:

“Of course there were and are gay men in the world of cattle and horses since the first cow spent the winter on the plains west of Laramie, but the great fiction that evolved in the 19th century and lay over the ranching West is that all cowboy horsemen and ranch hands were heterosexual, strong and fearless, brave and handsome, and though tough and daring, they were shy, sparing of words, always kind to orphaned doggies and children, extravagantly polite to women, etc. All this made up an irresistible masculine ideal that had/has political value. For many, the cowboy image became a potent symbol of American men. It was this confrontation with unreality that the story wanted to show through a look at two characters living in the real world of homophobic closeting.”

In addition to Proulx’s statement, the co-screenwriter, Larry McMurtry highlights once again the fact that same-sex love happens in the world of cowboys and subliminally we realize that it happens everywhere, but we fail to notice because we are ruled by stereotypes:

“I wondered why I hadn’t written it myself, because [homosexuality] has been hanging there in the West for over a hundred years, waiting to be written. I knew it, and everybody who was really familiar with cowboy life knew it.” Larry McMurtry says. Hathaway was filming Princess Diaries 2 when she was casted and she did her best to get the role being fascinated by the script, thing that happened to the entire cast. At the time she was in her early twenties and she notices the way she and the rest of the cast brought to life the gay rights issue that, as she observes, was not into discussion ten years ago, as it is now:

“The four of us were taken out to this restaurant in Calgary by the producers, and I remember sitting there and looking at beautiful Heath, and Jake, and Michelle, and it hit me that we were all under 25. It’s funny how recent it was, but at the time we were very far away from this burgeoning humanist moment that we’re having now with gay rights. And it felt like a very big and important step—a statement about love, about the need for love, about the consequences of limiting people. And I was just so blown away that these four 25-year-old kids could bring this to life, especially the three of them.” Brokeback Mountain will remain an iconic movie for the LGBT community and its tenth anniversary is meant to remind that it will last over the years to come as well.