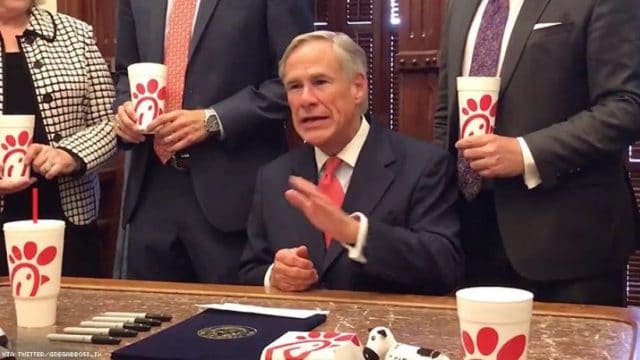 Texas Gov. Greg Abbott signed the so-called Save Chick-fil-A bill into law on Thursday while surrounded by Chick-fil-A food and beverages.

“Today I signed the @ChickfilA law in Texas. And, had a great lunch,” Abbott wrote on Twitter. “No business should be discriminated against simply because its owners gave to a church or to the Salvation Army or to any other religious organization.”

The legislation, known as Senate Bill 1978, prohibits government entities from taking “adverse actions” against businesses or individuals because of their religious beliefs or moral convictions.

But critics warn the new law is a thinly veiled attempt to undermine LGBTQ rights.

The bill received its nickname after the San Antonio City Council banned the fast-food franchise from opening a location in the city’s airport because of the company’s “legacy of anti-LGBT behavior.”

It also donated to the Fellowship of Christian Athletes, which enforces a “sexual purity” policy that bars “homosexual acts.” Finally, it donated to the Paul Anderson Youth Home, which provides housing for troubled youth and “teaches boys that homosexuality is wrong” and that same-sex marriage is a “rage against Jesus Christ and his values.”

Abbott officially signed the bill into law in June. It will take effect in September.