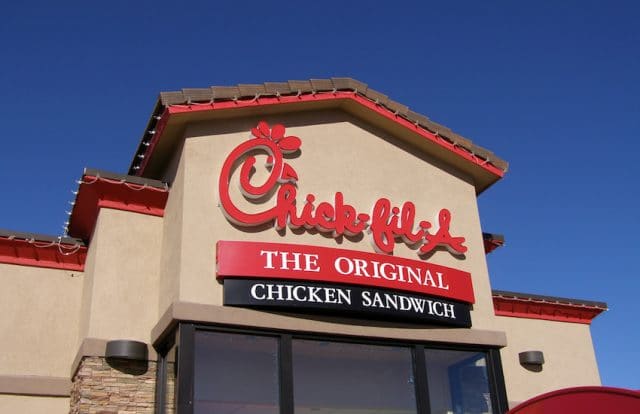 Days after a Chick-fil-A executive called donating to anti-LGBTI groups a ‘higher calling’, legislators in the Texas House of Representatives passed legislation known as the ‘Save Chick-fil-A’ bill.

Only Republican Rep. Sarah Davis defied the rest of her party to vote against the bill.

The bill’s purpose is the ‘protection of religious beliefs and moral convictions, including beliefs and convictions regarding marriage’. It prohibits any government entity from taking ‘adverse action’ against persons or organizations for their contributions or memberships to a religious group.

Republicans first introduced this religious freedom bill after San Antonio banned the opening of a Chick-fil-A in its city airport.

During the first introduction of the bill, the Texas LGBTI Caucus used a ‘parliamentary maneuever’ to kill the bill. The Caucus successfully challenged the bill, saying it legitimized and could legalize dicrimination against LGBTI people in the name of religion.

Last week, Texas Lt. Gov. Dan Patrick rushed the bill through a committee without any notice or a hearing, bringing the bill back to life.

Due to his authoritative action, the bill is now on its way to becoming law.

‘What we want to make sure is if you donate to the Salvation Army, you won’t be labeled as a bigoted,’ said Rep. Matt Krause (R), who sponsored the bill.

For Democrats, however, it’s not about religious freedom — it’s about legalized discrimination.

‘We can’t discriminate against one in order to protect the other,’ responded Rep. Mary Gonzalez (D). ‘The scariest part of this bill … is the individuals who will take this bill and use your vote for this bill to perpetuate hate.’

Gonzalez is only the second LGBTI person elected to the Texas legislature.

‘It sends a message that Texas is not open and welcoming to all. It puts Texas on the wrong side of history,’ she added.

Last week, Rodney Bullard, leader of the Chick-fil-A Foundation, defended the company’s donations to and support of anti-LGBTI organizations in an interview with Business Insider.

‘For us, that’s a much higher calling than any political or cultural war that’s being waged. This is really about an authentic problem that is on the ground, that is present and ever present in the lives of many children who can’t help themselves.’

Recent tax filings, however, show the groups Chick-fil-A donates to are religious and have a history of anti-LGBTI policies.

Next, the bill will head back to the Senate for a final vote. If it gets approved, it will then head to the Governor’s desk.