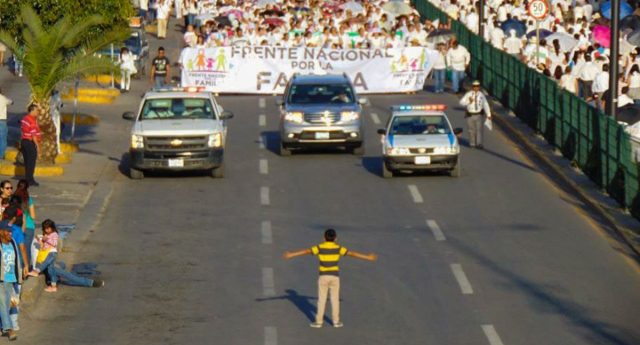 Tens of thousands of people tool to the streets of Mexico this weekend to protest against a proposed same-sex marriage law.

The proposal was made by President Enrique Pena Nieto to introduce same-sex marriage in the largely conservative country. Officials estimated that around 11,000 took to the streets of one city, Celaya, to protest against the law.

The demonstrations were organised by the National Front for the Family, a group of organisations and religious groups opposed to same-sex marriage.

However, they faced opposition from an unlikely source – as a young boy bravely stood in their path.

As the crowd marched through the city, the 12-year-old boy leaped in front of them, begging them to stop.

“As first I thought the child was only playing,” photographer and journalist Manuel Rodriguez told Regeneración.

But when Rodriguez finally got chance to speak to the child – who chose to remain anonymous – he discovered his real reasons for taking on the protestors.

“I have an uncle who is gay,” the child said. “And I hate that people hate.”

The boy has since been compared to the infamous Tank Man – the single unknown protestor who stood in the path of numerous tanks the morning after the Chinese military suppressed activists at Tiananmen Square in 1989. As well as organising the demonstrations – which drew larger crowds than expected – the National Front for the Family also gathered over 100,000 signatures against the proposal.

Mexico has seen a string of court battles over same-sex marriage, with Mexico’s Supreme Court last year ruling that it was unconstitutional for states to ban LGBT couples from marrying.

While same-sex marriage is not legal across the country, several states and Mexico City currently have laws allowing same-sex couples to marry.

The states of Coahuila, Quintana Roo, Jalisco, Nayarit, Chihuahua, Chiapas and Sonora have already legalised it but the other 30 states currently do not allow same-sex couples to marry.