Home Gay Life The mainstream media has been ignoring Trump’s attacks on LGBTQ rights for... 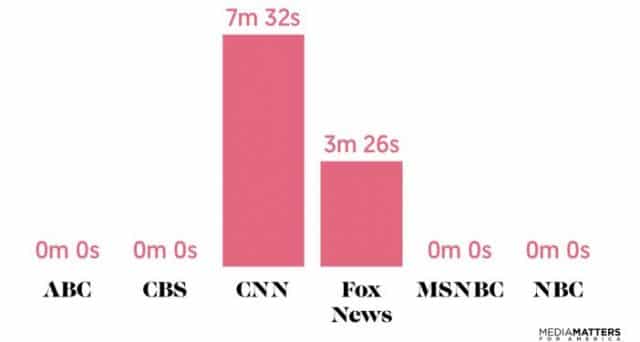 A Media Matters investigation found that major news networks have been largely ignoring the Trump administration’s attacks on LGBTQ rights.

While several new anti-LGBTQ initiatives were announced in the past few weeks, four of the major broadcast and cable news networks did not cover them at all, while the other two spent less than 11 minutes in total covering the initiatives over a 10-day period.

Media Matters cited three attacks on LGBTQ rights from this past month. First, the Department of Housing and Urban Development (HUD) proposed a rule that would allow homeless shelters that receive federal funding to turn away homeless people on religious grounds and allow those shelters to house transgender people with their sex assigned at birth.

Second, the Department of Health and Human Services (HHS) announced on May 24 a proposal to overturn an Obama administration rule that banned health care professionals from discriminating against transgender people. Under the proposal, health care providers could cite their religious beliefs as a reason to turn away transgender patients.

Last, HHS proposed a rule to allow federally-funded adoption agencies to turn away same-sex couples. Religious organizations have for years wanted to turn away LGBTQ parents and receive federal money.

Of the six major networks that Media Matters looked at from May 22 to May 31, only CNN and Fox News covered these issues at all. NBC, CBS, ABC, and the supposedly liberal MSNBC did not cover them at all. 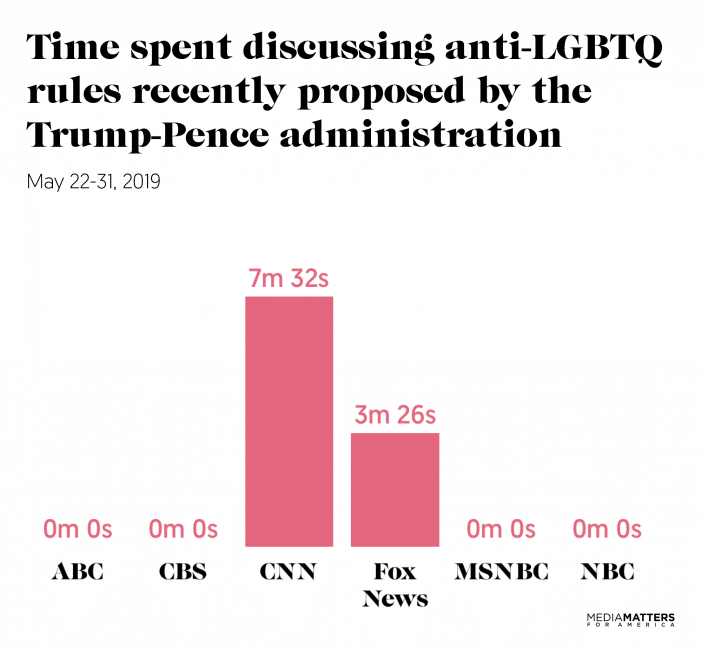 The total time spent covering the attacks during a 10-day period between six networks was 10 minutes and 58 seconds.

And that’s not accounting for the quality of the coverage, either. Part of Fox News’s coverage was an interview with Secretary of Housing and Urban Development Ben Carson, where he said that the rule to ban transgender homeless people was “being fair to everybody.”

Only one of CNN’s segments featured an actual LGBTQ person, and that was an interview with a trans actor about a recent Gillette commercial.

“Though cable and broadcast TV news spent little time covering the administration’s latest anti-LGBTQ rules, there is no mistaking that these decisions will have sweeping impacts on queer and trans people,” writes Media Matters’s Alex Paterson.

“Media outlets have a responsibility to properly cover the administration’s attacks on LGBTQ rights and to educate their audiences on the detrimental impacts these proposed rules will have on an already vulnerable community.”