Home Gay Life The Moulin Rouge, Paris might be the campest cabaret you’ll ever see

Imagine if someone told you there’s a cabaret show that had turned the camp factor up to 11.

And then someone was like, ‘oh no, it might be too gay to appeal to mainstream audiences’. That same someone then decided to have dozens of female performers dance topless.

I’m not sure whether that’s what happened in producing Moulin Rouge shows, but that’s my best guess.

A friend and I surprised another friend with 11pm show tickets for her 30th birthday. On a cool Saturday night in Paris, we got dressed in our glad-rags and headed down to the most iconic red windmill in the world.

This attraction in the heart of bustling Montmartre knows why you’re there to visit. 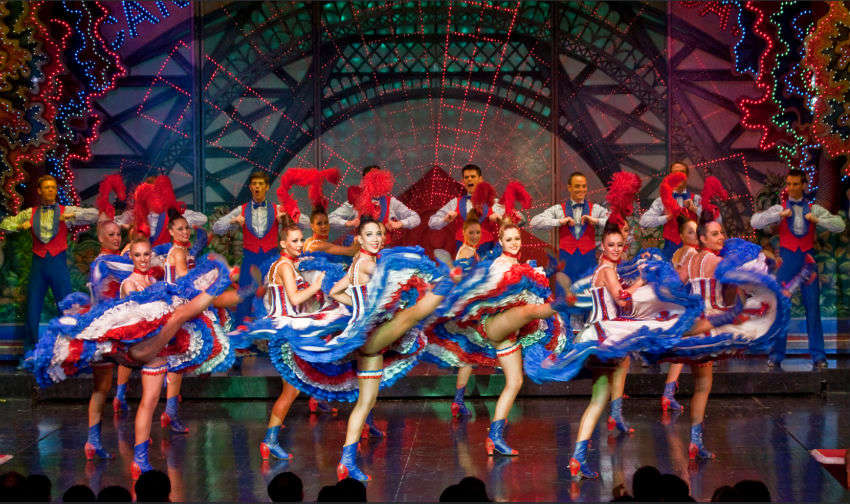 Inside feels like you’re transported to the romance of fin de siècle France.

You’ll likely know Moulin Rouge from the movie (which the show has nothing in common with – barring the name and iconography). But you may also know it as the birthplace of the can-can.

The show is so much more.

We saw Féerie, consisting of 80 artists. The Doriss Girls, recruited worldwide, are donned in revealing costumes of feathers, rhinestones and sequins.

The men are often wearing suits that sparkle so much you might get blinded. And in some scenes, they’ll be happy to reveal their waxed Ken doll-like chests.

Everything passes by almost like a champagne-confuddled dream. Thankfully, I took some notes.

It’s a bizarre but wonderful show. It’s strange, dream-like, and camp as Christmas.

The Moulin Rouge might appeal to tourists, but it’s a gem. It feels like a portal to another time, another place – an unforgettable world-standard cabaret.

VIP tables cost €127 ($141) per person. Each of those tickets includes a free half-bottle of champagne. Go to the Moulin Rouge website for tickets.