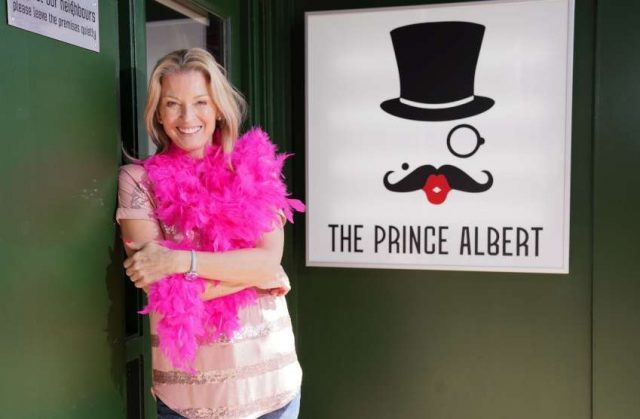 The name of the new gay bar on one of the UK’s most beloved TV soap operas has been revealed.

The new bar based in Walford, East London will have the name: The Prince Albert.

Character Kathy Beale will run the bar after after taking her time renovating it and deciding what to name the new bar. Beale could only afford the lease to the bar when she realized the necklace her son gave her was worth ‘a considerable amount of money’.

Walford drinking holes have provided the backdrop for some of EastEnders’ most dramatic moments.

‘From a simple pint over the head to numerous affair reveals and even murder, Walford watering holes are often very dangerous places,’ the EastEnders publicity team said in a statement.

The publicity team ominously warned as ‘Kathy settles in behind the bar, only time will tell what drama will unfold on the dancefloor’.

The Prince Albert’s doors will swing open sometime in June ahead of EastEnders’ first ever Pride march in July.

As one of the UK’s most popular soaps, Eastenders has aimed to reflect the diversity of modern-day London.

The show was also one of the first prime-time entertainment shows in Britain to include LGBTI representation.

In 1987, the soap aired the first same-sex kiss when one male character gave another a peck on the forehead. The following year it went one step further when it showed two men kissing on the lips.

EastEnders airs on BBC One.