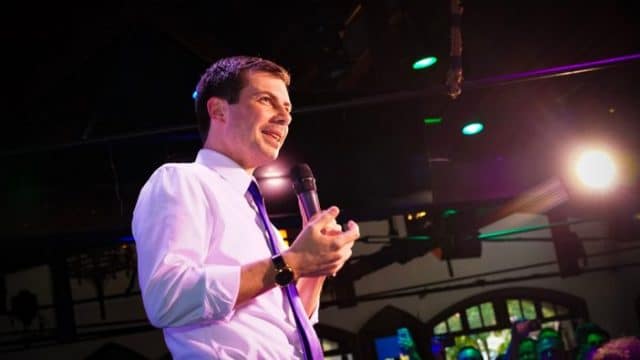 In Peck’s long, rambling diatribe —which has since been removed from the site with an editor’s note calling it “inappropriate and invasive” — he wrote this offensive passage:

All this makes Mary Pete different from every other left-leaning neoliberal in exactly zero ways. Because let’s face it. The only thing that distinguishes the mayor of South Bend from all those other well-educated reasonably intelligent white dudes who wanna be president is what he does with his d*ck (and possibly his ass, although I get a definite top-by-default vibe from him, which is to say that I bet he thinks about getting f*cked but he’s too uptight to do it). So let’s dish the dish, homos. You know and I know that Mary Pete is a gay teenager. He’s a fifteen-year-old boy in a Chicago bus station wondering if it’s a good idea to go home with a fifty-year-old man so that he’ll finally understand what he is.

The article was barely up for one day before finally being removed from the site last night. In a note upon the article’s page, New Republic Editor Chris Lehmann wrote, “The New Republic recognizes that this post crossed a line, and while it was largely intended as satire, it was inappropriate and invasive.”

Lehmann has not commented on why or how he allowed the piece to be published in the first place.