Home Gay Stars ‘The oldest gay in the village’ vows to fight on when he... 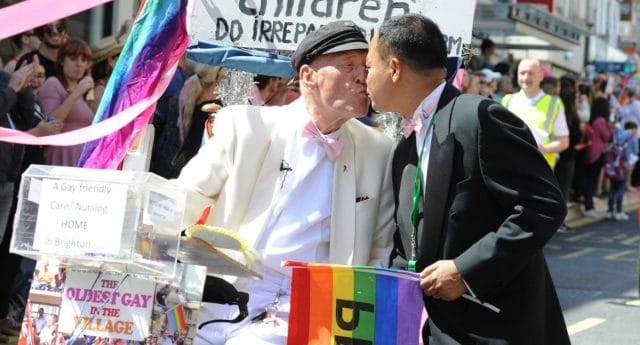 The man dubbed the ‘oldest gay in the village’ has said he will fight on after he didn’t receive an apology he thought he had been promised.

George Montague, 93, has been fighting to receive an apology for a conviction for gross indecency back in the 1970s.

He has led Brighton’s Pride celebrations in recent years says he is “upset and angry” and that he has been “deceived by the government”. 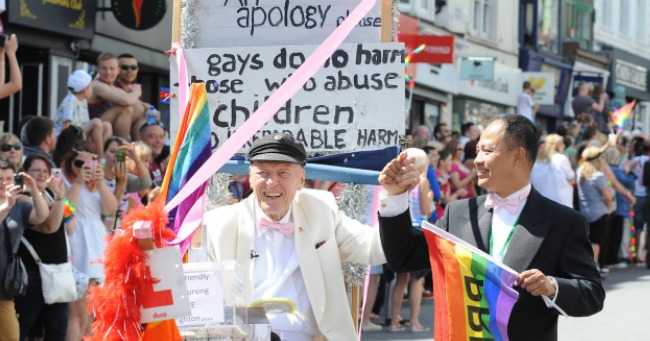 His story will feature on More4’s documentary ‘Convicted for Love’ this evening.

Earlier this year he thought he was about to receive the apology for the conviction under Britain’s now defunct anti-gay law.

Mr Montague says he was “forced to live a double life” because of homophobic laws.

He was arrested in a public toilet for gross indecency for being on what he calls the “queer list”.

Mr Montague says that his conviction wasn’t one of 113 which have been disregarded or pardoned.

He says there were 15,000 people convicted who should have received an apology.

The documentary makers says they uncovered the secret of the lack of an apology using a Freedom of Information Enquiry to the Home Office.

In the programme, Mr Montague says: “What’s the point of giving a pardon when someone wasn’t guilty in the first place? What were they guilty of? Only being born only able to love and be in love with another man. The law is what was wrong, and therefore it needs an overall genuine apology.”

Mr Montague says that the confusion over an apology came from a quote in a letter from a government minister’s speech saying:

“At this point, I want to take the opportunity to apologise unreservedly, on behalf of the Government, to all those men who will receive a pardon.”

He says that the confusion was “deceitful” and that it was “intended to confuse George”.

Mr Montague says: “What is so deceitful and wrong about the government’s behaviour is that when he went on the BBC saying I had the apology, nobody from the Home Office or the government came back to say I was mistaken and in fact I hadn’t got it.”

He says he will campaign on to get the apology he deserves.

This year marks the 50th anniversary of the decriminalisation of homosexuality in England and Wales.

Mr Montague realised he was gay in his twenties – long before the decriminalisation of homosexuality.

Like many of his friends at the time Mr Montague married his wife, Vera, at the age of 37, and the couple had three children.

They were together for more than 20 years.

“I was always convinced my wife knew I was gay when she married me but it wasn’t discussed”, he said.

Former Prime Minister David Cameron also praised the campaigner for his LGBT advocacy in a letter.

David Cameron wrote: “I understand that you have been involved in Gay Pride events for some years, and were at Pride in London this year, as well as being elected an Ambassador for Brighton Pride 2013.

“Let me congratulate you for this, and your involvement in charity fundraising. Your commitment to the community is very impressive.”