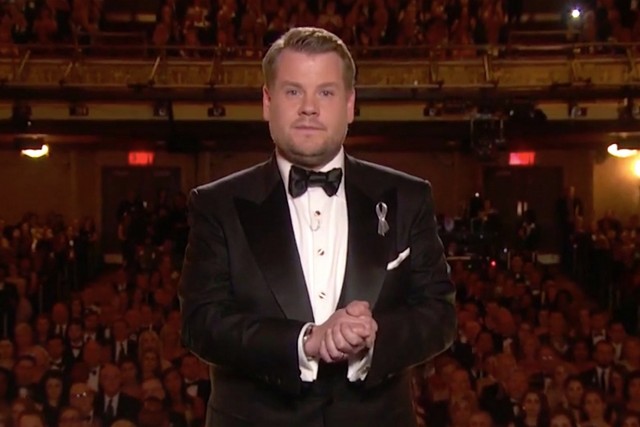 The tragedy at Orlando Pulse gay bar has left many of us wondering where is the world heading to.

With 52 deaths and as many injured, the mass shooting is the worst in the history of America. ISIS claimed the attack on the Amaq news agency and the shooter was identified as Omar Mateen, a resident of Port St Lucie, Florida. Mateen was killed in a gun battle with the police on Sunday morning.

The whole world is in shock, and many public figures speak out for the victims of the tragedy, and support their families.

At the opening of Tony Awards, James Corden paid tribute to the victims and sent a powerful message: ” Hate will never win!”

‘All around the world, people are trying to come to terms with the horrific events that took place in Orlando this morning,’ Corden began his speech. ‘On behalf of the whole theater community and every people in this room, our hearts go out to all of those affected by this atrocity. All we can say is you’re not on your own right now.’

‘Your tragedy is our tragedy,’ he continued. ‘Theater is a place where every race, creed, sexuality and gender is equal, is embraced, and is loved. Hate will never win. Together, we have to make sure of that. Tonight’s show stands as a symbol and celebration of that principle.’

A silver color ribbon was created to symbolize the support for those who have perished in a senseless act of hate and to show the survivors they are not alone. Those who participated at Tony Award wore this ribbon as a sign of solidarity.

The Tonys have created a ribbon in remembrance for Orlando. The Theatre community stands in solidarity. Please Regram. #TonysRibbon

Silver ribbons worn at the #TonyAwards tonight to honor the #Orlando victims. pic.twitter.com/PdPfo8W9fa