Home Gay Life The religious right has found its own anti-LGBTQ soccer player to counter... 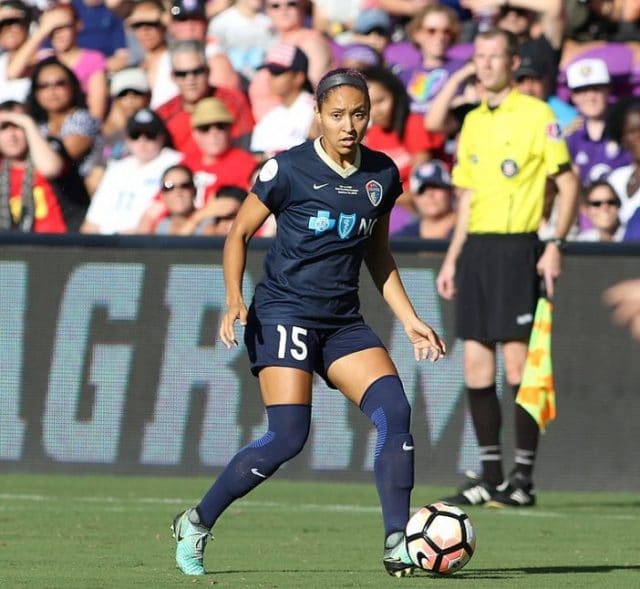 While most of the country has been celebrating the U.S. Women Soccer team’s World Cup victory, the right-wing has been acting like a bunch of sore losers because of the number of out and outspoken lesbians on the U.S. team.

President Trump has complained bitterly about star Megan Rapinoe who said she’d refuse to step foot in the White House. Compounding her offense in the eyes of the right: Rapinoe’s having taking a knee during the national anthem as a sign of solidarity with black football players protesting racism.

So what’s the right, and especially the religious right, to do? Make up their own hero, of course.

In this case, it’s Jaelene Hinkle. By all accounts, Hinkle is an amazing player on the North Carolina Courage team. She is considered by many to one of the country’s best left backs. So why wasn’t she on the U.S national team?

Hinkle was twice called into camp for the national team. But in 2017, she declined the offer. She later revealed the reason: She didn’t want to wear a jersey with the rainbow flag on it to celebrate Pride Month because it was against her faith. Unsurprisingly, she made this announcement in 2018 on The 700 Club, the flagship program of the Christian Broadcasting Network and home to longtime anti-LGBTQ preacher Pat Robertson.

Hinkle said that “I just felt so convicted in my spirit that it wasn’t my job to wear this jersey.” She also portrayed herself as “giving up one little girl’s dream about their entire life” by turning down the opportunity to join the soccer camp.

Hinkle didn’t explain how she expected to show team spirit when several of her would-be team mates, including Rapinoe, are lesbian, as is head coach Jill Ellis. But despite her statement, the team invited her back to camp just two months later and she accepted the offer. She was cut after three days.

Ellis said the decision was “solely based on soccer.” She elaborated that she was looking for a player with the versatility to play more than one position and not someone “locked to one position.”

Hinkle wasn’t even considered a candidate for this year’s team. But now that the team won the World Cup, she is emerging as the religious right’s latest victim of the LGBTQ agenda. Right-wing outlets like the Washington Times and The Christian Post have taken her up as an example of Christian martyrdom.

As a player on Team Religious Right, she’s a perfect fit. When the Supreme Court legalized marriage equality in 2015, Hinkle bemoaned the decision.

“This world is falling farther and farther away from God,” Hinkle tweeted at the time. “All that can be done by believers is to continue to pray.”

Leaving no fundraising opportunity behind, the American Family Association, a hate group with a long history of anti-LGBTQ bigotry, is asking supporters to sign a petition of support for Hinkle. The petition does little other than build AFA’s mailing list.