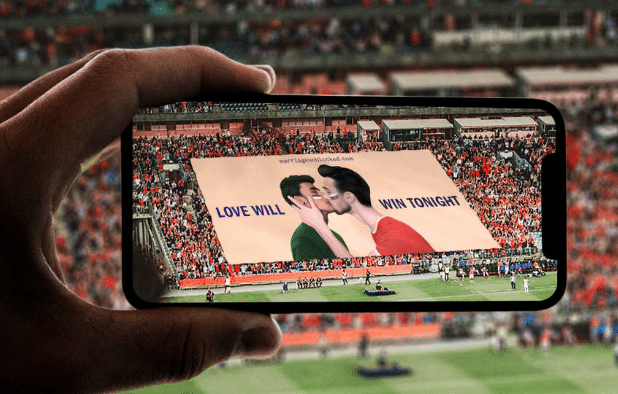 When audiences come to watch the first game of the World Cup tonight (14 June), there will be a secret LGBTI message hidden in plain sight.

The first game will be between Russia and Saudi Arabia, two countries which prosecute against the LGBTI community.

Using this link, fans will see a gay couple kissing with the Russian and Saudi Arabian flags on their cheeks.

It is similar to the way Snapchat and Pokemon Go works, transplanting a created image in the eye of a phone’s camera.

Known as a ‘tifo’, the augmented reality message will say ‘Love Will Win Tonight’.

Tonight’s augmented reality will take a stance against LGBTI inequality in Russia and Saudi Arabia, which still widely condemn homosexuality. In Russia promoting homosexuality is considered propaganda, while in Saudi Arabia it is punishable by death.

Supporters can access the AR from anywhere for the whole duration of the World Cup. The tifo, however, is specifically fit for Luzhniki Stadium. People at the Russian arena can place the AR-filter on the pitch, grab a screenshot and share it using the hashtag #MarriageUnblocked.

Tie the knot on Blockchain

Swedish sports and fashion brand Björn Borg is promoting the AR to launch their new digital platform, Marriage Unblocked. It will enable anyone, regardless of their sexuality, to virtually walk down the aisle. The couples can then download a certificate of their digital marriage.

Tying the knot digitally will be possible on Blockchain, the same technology used for cryptocurrencies such as Bitcoin. Couples can say ‘I do’ without the involvement of any third parties such as the state or the church. They can also decide whether to make their digital marriage public or protect their anonymity.

‘Sport is love and love is equal’

‘We believe that sport is love and love is equal,’ said Jonas Lindberg Nyvang, marketing director at Björn Borg.

‘We are a sports and fashion brand. Fashion has always been in the forefront when it comes to LGBTQ issues, but in sports, it’s still rare that athletes “come out” during their career. We can’t find a better moment to lift this debate than during the World Cup in Russia.’