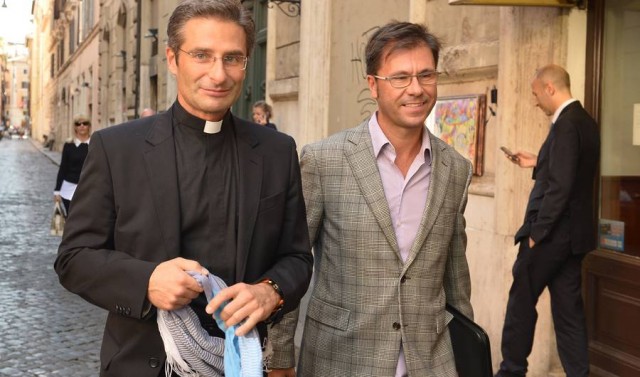 His name is Krzysztof Olaf Charamsa and he is a Polish priest working for the Vatican’s theologian core. Or, at least, he was, until Saturday when he took part in a news conference in Rome, revealing himself as gay, after which he was fired. The 43 year old Charamsa was accompanied by his partner and his intention was to criticize the Catholic Church for bashing the same-sex relationships and associating them with a sinful behavior. The Vatican’s response was pretty swift and Charamsa was relieved of his duties, which did not seem to affect him that much: “I am out of the closet and I’m very happy about that. Now I can say I am a happy priest. Now I am transparent”. Furthermore, he insists that the Vatican’s policy regarding the LGBT community is not favorable to say the least: “To my church, I want to say that I reject and I denounce the current atmosphere of exasperating homophobia. Open your eyes to the suffering of the gay people, to their desire for love.”

In response to Charamsa’s gesture, Father Federico Lombardi declared that the main reason for the decision to fire the priest was the fact that his conference held in the opening of the Synod of bishops that began the following day. He said that the Vatican considers his act as “very serious and irresponsible”, which added to the fact that a member of the Congregation for the Doctrine of the Faith swore for celibacy, which also means that his recent gesture conflicts with his sacred vows. Krzysztof Charamsa issued a message of hope for all those in his position: “Every homosexual person is a son of God. I dedicate my coming out to all gay priests. I wish them happiness even if I know that most of them will not have the courage to make the gesture that I have made today. I want to advocate for all sexual minorities and their families who have suffered in silence.”

He also revealed his plan to soon start to write a book about his 12 years serving the Vatican, exposing the “paranoia and hypocrisy” that shape the doctrinal policy carried out by the Catholic Church.