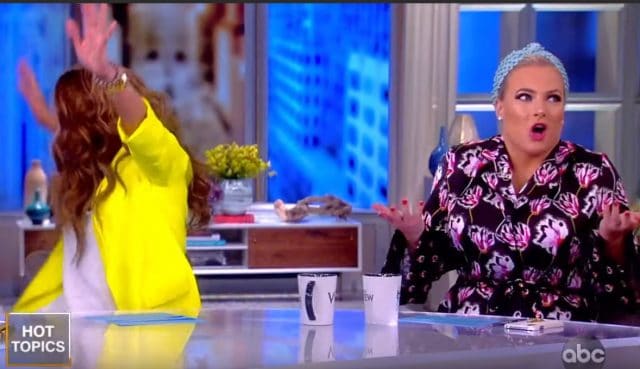 The divisive conclusion of HBO’s Game of Thrones series was one of the Hot Topics this morning on “The View” and Meghan McCain wasted no time spoiling the answer to the episode’s biggest question: Who took the throne?

“I spent 8 years of my life watching this and it was a horrible ending,” she exclaimed, before revealing the ending [we will leave out what she said next for those who have not seen the final episode.]

Co-host Sunny Hostin, however, was furious after McCain’s spoiler, yelling, “Oh, I’m only on Season 4!”

She then turned her attention towards some angry audience members, telling them, “You’re genuinely upset. Why is this a Hot Topic then if I’m not supposed to talk about it?!”

“It’s a huge show, I think shows should be watched in real time. It was a terrible ending, I was very disappointed,” she continued.

She then shifted blame to her show’s producers, saying, “What were we supposed to talk about? So we’re clear, I wasn’t told no spoilers, I wasn’t told I couldn’t say anything. Apparently, I’m going to get the wrath of the internet when I leave. Why is this a Hot Topic then?!”

If you haven’t watched the finale of “Game of Thrones,” avoid watching the video below. [Video Spoiler Alert]

McCain continued her apologies after the show aired: “I’m so sorry for the #GOT spoilers on the show today! I assumed every diehard fan had watched! My bad. Don’t watch west coast if you don’t want a spoiler.”

I’m so sorry for the #GOT spoilers on the show today! I assumed every diehard fan had watched! My bad. Don’t watch west coast if you don’t want a spoiler.