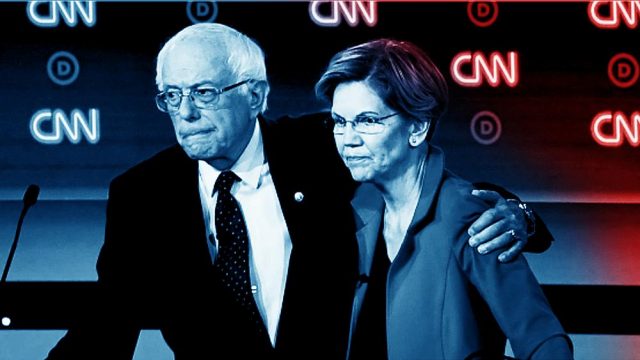 DETROIT — The progressive all-stars lost in a draw.

Facing a field of more-centrist Democrats trailing them in the 2020 presidential primary polls, liberal Sens. Bernie Sanders, I-Vt., and Elizabeth Warren, D-Mass., locked arms at Thursday’s CNN debate here to make the case for their “Medicare for All” health insurance plan and other “bold progressive” changes to public policy.

If they were going to demonstrate convincingly that it would take big, bold progressive policy ideas to beat President Donald Trump, surely it would have helped to wipe the floor with the other eight lower-stature Democrats on stage with them.

But that didn’t happen. Not at all. If anything, they looked vulnerable to the more-friendly fire of fellow Democrats.

Warren and Sanders were ambushed before they could speak.

“We can go down the road that Senator Sanders and Senator Warren want to take us, which is with bad policies like Medicare for All, free everything, and impossible promises that will turn off independent voters and get Trump re-elected,” former Maryland Rep. John Delaney, owner of a 0.7 percent average in recent polls, said in opening remarks that compared the senators to defeated liberal Democratic nominees George McGovern, Michael Dukakis and Walter Mondale.

Over the course of the next two hours, Warren and Sanders insisted that only sweeping changes that would fundamentally change political and financial structures would both motivate voters to go to the polls and improve their lives.

“We have to think of this in the big frame,” Warren said. “These insurance companies don’t have a God-given right to make $23 billion in profits and suck it out of our health care system.”

And the field countered the way that Rep. Tim Ryan, D-Ohio, did when he criticized Sanders’ explanation of the Medicare for All proposal because it would move union workers out of private insurance plans.

Democratic strategists who watched the back and forth between the two ideological sides in the party said it was tough to say which one won.

“There is a clear fight for the soul of the party,” said Chris Kofinis, who has worked on Democratic presidential campaigns in past election cycles. “It’s just not clear, based on this debate, who’s winning.”

Recent polling suggests that, together, Sanders and Warren have about one-third of the primary electorate behind them, which is in line with the share that favors front-runner and former Vice President Joe Biden.

But there are no other candidates in the race who are as consistently progressive on issues or as persistently aggressive in their pitch for big changes as Warren and Sanders. That puts the onus on them to build a stronger following among Democratic primary voters, either in tandem or separately, to capture the nomination for their wing of the party.

On the second night of the two-day debate set, there won’t be any candidates as beloved by the progressive community on the stage with Biden and Sen. Kamala Harris, D-Calif., who rounds out the top four in national polling.

This was the left’s first big shot — and it just didn’t hit.

“Almost seemed like a draw, which is a reflection of where Democrats are in terms of those who want to see real progressive changes on health care versus those who want to improve upon our current policies and defeat Trump,” Adrienne Elrod, a former aide to Hillary Clinton and an MSNBC political contributor, said in a text message.

Of course, that wasn’t the read from the Progressive Change Campaign Committee, which has all but trademarked the term “bold progressive,” endorsed Warren and been supportive of Sanders.

“The conservative Democrats came at Warren Sanders — and the progressive tag team won because their bold ideas are both popular and good policy,” Stephanie Taylor, co-founder of the PCCC, said in a statement. “The one-two punch of Warren and Sanders won the debate by making the case for a bold, progressive, transformational presidency that proposes big solutions to the big problems in people’s lives.”

But there are Democrats who believe that the big-change theory could be too much for swing voters in the states that their party needs to win to capture the White House. More incremental policy adjustments offered by candidates like Minnesota Sen. Amy Klobuchar, Ryan and South Bend Mayor Pete Buttigieg could resonate better in those places, they argue.

“Let’s be honest: D.C., New York, Boston and California are progressive echo chambers just like Democratic Twitter,” Ben LaBolt, a former aide to President Barack Obama, said in an email. “Midwesterners are practical and pragmatic people who in my experience are less into bold ideological reforms than they are chipping away at issues that matter to their families. By leading so strongly on ideology Warren and Sanders may not ultimately be reaching the persuadable voters in the battleground states.”

For now, Warren and Sanders still have work to do to win the war within the Democratic Party.